Syrian Future: No Role For the Corrupt Dictatorship

by Ghassan Karam
1054
by Ghassan Karam Dictatorship is illegitimate by definition since it represents taking power by force and it maintains it through oppression, fear and brutality.
Share: 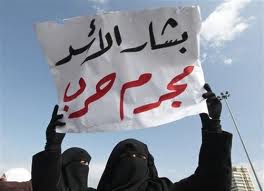 Dictatorship is illegitimate by definition since it represents taking power by force and it maintains it through oppression, fear and brutality. That is one reason that most dictatorships, Arab ones in particular have felt the need to pretend that they are legitimate by setting up sham elections. As if anyone really believed that 99.9% support abuse and cruelty.

The Arab Spring has not given the Arab world a single dynamic democracy yet but it has given voice to the Arab masses who have decided to stand up and demand their right to be heard. Governance in the Arab world will never be the same again. Finally a movement has been born to tell dictators that the long journey to democracy and personal freedom, the journey to human dignity will not be stopped.

Bashar Assad of Syria exemplifies the tyranny of Arab dictatorships. His father rose to power through a coup and ruled the country under emergency law for 30 years. When Hafez Assad died his son Bashar, an ophthalmologist, inherited a country and continued the exploitation and the one man rule of governance.

Many Syrians were encouraged by the relative success of the Arab masses in Tunisia, Egypt, Libya and Yemen and so initiated small roving peaceful demonstrations. Dictators do not seek the approval of those that they govern; instead they maintain control by the use of brutal secret service supporters/gangs that inflict random violence. The response of the Bashar Assad regime was initially subdued because he had feared that a sharp escalation would bring about a response from the world community similar to that in Libya.  As time passed the Syrian forces became more forceful but stopped shy of leveling civilian quarters in major cities with tanks and artillery. The West had warned that such attacks will not be tolerated but will be met with a stern response.

This is when Russia decided to step in and protect its only client in the Arab world. Russia sent armaments and assured the Syrian regime that Russia and China will veto any attempt by the Security Council to pass any measures similar to what had happened in Libya. The regime then tested the will of the international community by waging a strong military attack on a neighbourhood in Hama. No meaningful Western response was forthcoming.  Russia and China delivered on their promise to keep the UN Security Council in check. This emboldened the Syrian regime to try its strong military tactics again in Homs.  Again the West failed to act. Since then the Syrian government, shielded by Russia and China and helped by Iran has been acting with impunity.

One Arab League initiative, which was passed through the UN Security Council, appointed Kofi Annan to find a peaceful solution to the Syrian crisis. This was not opposed by either Russia or China and so Mr. Annan is trying to apply the same rules to the victims as well as the victimizers. It appears that this effort will be abandoned since so far  the level  of violence by the Syrian forces has not diminished, actually it has led to the most grotesque massacre in this conflict so far; Al Houla Massacre.

So where we and what are next in this conflict? The current government is illegitimate, it is a dictatorship that has failed to evolve and reform for over forty years, it has sought and obtained Iranian help in putting down the insurrection, it has used Russian and Chinese political protection to increase the frequency and ferocity of its military attacks against its own civilian population. It has taken advantage of the well meaning efforts by Mr. Annan in order to increase the level of violence and it has called on its Lebanese minions to expand the Syrian conflict into Lebanon so as to make the Syrian government’s warning that without Bashar regional instability will ensue a reality.

This is a regime that has never had any legitimacy, a regime that does not value personal freedom, a regime that survives by oppression and brutality a regime that is best described as a regime of human depravity. This regime must be held accountable for all its human right abuses over the past 14 months of this uprising as well as all its previous excesses against Hama, Kurds and all its political opponents. To argue that this regime must be negotiated with only because it has large guns is an insult to reason and rationality. Furthermore the efforts to justify a continuation of this regime on the ground that its level of brutality is not as grotesque as it is in some other dictatorships are ludicrous and actually contemptuous. And last but not least, as the world evolves and as cosmopolitanism spreads the circle of ethics widens from the self to the family then the tribe the state and eventually the world. That would then call for a universal right to protect against slavery, exploitation and flagrant violation of the most basic principles of human rights. The Syrian people are entitled to freedom of expression and self determination in an open and free election without having to fear the ghosts of the Assad secret services and their egregious acts.