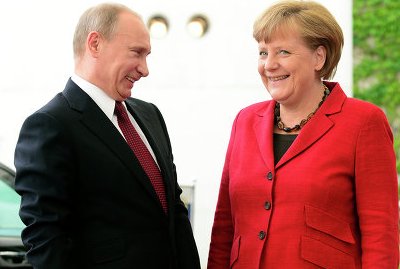 President Vladimir Putin denied on Friday that Russia was supplying arms to the Syrian government to crush rebels, brushing off U.S. criticism of a “reprehensible” arms shipment to Damascus.

Putin, speaking after talks with German Chancellor Angela Merkel, also reiterated that Moscow does not back any side in what he called an “extremely dangerous” situation in Syria and said patience was needed to achieve a political solution.

“We have a good, long-standing relationship with Syria, but we do not support any side from which the threat of a civil war may emerge,” Putin told a joint news conference with Merkel.

“As for supplying weapons, Russia does not provide weapons that could be used in a civil conflict,” he added.

On Thursday, Western officials confirmed a report from the Human Rights First group that a Russian cargo ship had delivered heavy weapons to the Syrian port of Tartus last weekend.

The weapons were for Syrian President Bashar al-Assad’s security forces, which have sought to crush peaceful protesters and armed insurgents for the past 14 months.

One Western diplomat said the cargo included heavy weapons, though it was not immediately clear what kind. A spokesman for Russia’s U.N. mission said he would look into the issue.

U.S. Ambassador to the United Nations Susan Rice had tough words for Moscow, saying: “It’s reprehensible that arms would continue to flow to a regime that is using such horrific and disproportionate force against its own people.”

Last week more than 100 people were killed in a massacre in the Syrian town of Houla, which the United Nations said appears to have been the work of the Syrian army and pro-Assad militiamen. Damascus blamed the atrocity on the rebels.

Moscow has previously defended its arms sales to Damascus against Western criticism, saying government forces had to protect themselves against rebels receiving arms from abroad.

Germany’s Merkel, who on Thursday described the Syria crisis as a “catastrophe”, said she and Putin both favored a political solution, building on efforts by former U.N. chief Kofi Annan to halt the bloodshed and promote dialogue on a transition.

“We both made clear that we want a political solution, and that the Annan plan can be a starting point, but we must work with all our energy and force, particularly in the U.N. Security Council, on implementing this plan and if necessary developing other political actions,” Merkel said.

Putin also reiterated Russia’s support for the efforts by Annan, joint envoy of the United Nations and Arab League.

“Is it possible to do? Overall, I think it is possible. It requires a certain level of professionalism and patience. Nothing should be done with force and be expected to have an instant effect,” said the Russian leader.

Several hundred anti-Assad protesters staged a demonstration against Putin’s visit near the venue of his talks with Merkel, waving flags and placards.

Putin was paying his first visit to Germany, Russia’s second biggest trade partner after China, since his return to the Kremlin last month. A fluent German speaker, Putin also discussed trade ties and the euro zone crisis with Merkel.