Mubarak gets life in prison after being found guilty 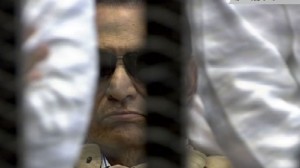 Egypt’s ex-President Hosni Mubarak was sentenced to life in prison Saturday for his role in the killing of protesters during last year’s revolution that forced him from power, a verdict that caps a stunning fall from grace for a man who ruled the country as his personal fiefdom for nearly three decades.

The harsh sentence against the 84-year-old former leader appeared aimed at defusing tensions ahead of a divisive runoff presidential race that pits Mubarak’s last prime minister against the Muslim Brotherhood’s candidate.

Mubarak, the first Arab leader to be tried in his own country, remained silent inside court cage while his once-powerful sons appeared nervous and had dark circles under their eyes. His elder son Alaa whispered verses from the Quran.

The 84-year-old Mubarak was then ferried in a helicopter away from the police academy that was used by the court in Cairo.

Scuffles between Mubarak supporters and opponents broke out inside and outside the courtroom after the verdict was read, reflecting the deep polarization of the country since Mubarak was overthrown on Feb. 11, 2011.

Thousands of riot police cordoned off the building to prevent protesters and relatives of those slain during the uprising from getting too close. Hundreds stood outside, waving Egyptian flags and chanting slogans demanding “retribution.” Some spread Mubarak’s picture on the asphalt and walked over it.

Mubarak and his two sons — Gamal and Alaa — were acquitted on corruption charges, but the sons still faced a separate trial on charges of insider trading. Ex-interior minister Habib el-Adly also was sentenced to life for the protester killings. Six other security officials were acquitted.

Judge Ahmed Rifaat delivered a strongly worded statement before handing down the sentences. Mubarak, who wore sunglasses and a light brown jacket over his clothes, and his co-defendants were in an iron cage.

Rifaat described Mubarak’s era as “30 years of darkness” and “a darkened nightmare” that ended only when Egyptians rose up to demand change.

“They peacefully demanded democracy from rulers who held tight grip on power,” the judge said.

Rifaat, who was presiding over his last court session before he retires, said Mubarak and el-Adly did not act to stop the killings during 18-day days of mass protests that were met by a deadly crackdown of security forces on unarmed demonstrators. More than 850 protesters were killed, most shot to death, in Cairo and other major cities.