President Michel Suleiman sought Saudi help in securing the release of the 11 Lebanese pilgrims taken hostage by Syrian rebels during a meeting with Saudi King Abdullah bin Abdel-Aziz on Friday in the Saudi port city of Jeddah.

Suleiman, accompanied by Public Works Minister Ghazi Aridi, flew Jeddah Friday for a one day visit to the kingdom. He was met at the airport by Saudi Foreign Minister Prince Saud al-Faisal and the Saudi Ambassador to Lebanon Ali Awad Assiri.

During the meeting at the Salam Palace, Suleiman discussed with Abdullah the issue of Lebanese hostages held in Syria and the possible assistance by the kingdom in securing their release, according to a statement issued by Baabda Palace.

The talks also covered bilateral relations and ways of boosting them, the situation in the Arab world, current developments in the region and Suleiman’s invitation to convene an intra-Lebanese National Dialogue, the statement said.

The president reportedly also discussed the travel advisories issued by four Gulf Cooperation Council countries restricting travel to Lebanon. The countries are Bahrain, Kuwait , Qatar and UAE. the president will be heading to Kuwait on Sunday to discuss this issue. 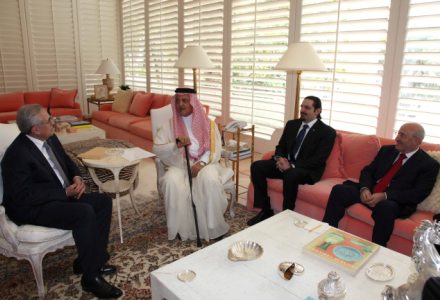 Prince Saud hosted a luncheon in Suleiman’s honor which was also attended by former Prime Minister Saad Hariri, who has been absent from Lebanon for over a year due to security reasons

Suleiman’s visit to Saudi Arabia came a few days after he had invited rival Lebanese political leaders to convene for National Dialogue talks on June 11 in an attempt to prevent the country from sliding into sectarian strife as a result of the turmoil in neighboring Syria. The invitation for all-party talks followed a letter from the Saudi king to Suleiman last week calling on him to sponsor the National Dialogue after expressing Riyadh’s concerns over recent developments in Lebanon, including security incidents in the north, “especially the targeting of a major sect in the country’s social fabric.”