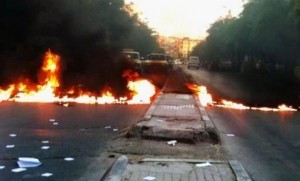 Syrian activists threatened a “volcano of rage” on Friday over the killing of civilians by government forces as a deadline set by rebel fighters passed for Damascus to honour a UN-backed ceasefire.

State media called for nationwide prayers in memory of the more than 100 dead, many of them children, near the central city of Houla last week, after an official inquiry pinned the blame on the rebels.

But with international outrage mounting after UN military observers on the ground held the government responsible, the United States sharply upped up the pressure on longtime Syrian ally Russia to end its support for its President Bashar al-Assad’s regime.

On the first Friday since the killings in Houla, opposition activists called on Syrians to rise up across the country in honour of the 49 children who were among the 108 dead counted by the UN mission.

“A new volcano of rage is exploding thanks to them,” protest organisers said on their Syrian Revolution 2011 Facebook page, which has been a major engine of the 15-month uprising against Assad’s rule.

“For those pure souls who sacrificed themselves at the altar of our freedom and sacrificed their blood… tomorrow Friday, we will rise up in such a resounding way, and we promise them, there will be no second Houla,” they said.

The main weekly Muslim prayers at noon were set to coincide with a deadline set by commanders on the ground of the rebel Free Syrian Army for the Assad’s government to respect a UN-backed peace blueprint or face a sharp escalation of the 15-month uprising.

Under the plan brokered by UN-Arab League envoy Kofi Annan, all sides were supposed to respect a ceasefire from April 12 but it has been broken daily with 64 people killed on Thursday alone, according to a Britain-based human rights watchdog.

The dead included 18 loyalists troops in an indication of the growing toll being exacted by the rebels in a conflict that UN chief Ban Ki-moon again warned on Thursday risked degeneration into an all-out civil war that Syria would never recover from.

State television called for prayers “in all of Syria’s mosques” for the Houla dead and for “all the country’s martyrs” as the government’s own inquiry absolved it of responsibility for the deaths.

The foreign ministry said it regretted Ban’s warning saying the UN chief had himself become a “herald of civil war.”

“It is regrettable that the Secretary General of the United Nations has departed from his mission of maintaining peace and security in the world to becoming a herald of civil war,” ministry spokesman Jihad Makdisi told a Damascus news conference.

But as fears mounted of an all-out conflict that could spill over Syria’s borders, divisions deepened between the major powers on best way forward.

Demanding tough new action by the UN Security Council against the Assad regime, Washington lashed out at Moscow, accusing it of stoking the crisis by providing Damascus not only with political cover but also with arms shipments.

She said that the claims of Russia’s Syrian ally that it was not to blame for the Houla massacre were a “blatant lie.”

“With respect to the reported docking of a ship carrying Russian arms, this is obviously of the utmost concern given that the Syrian government continues to use deadly force against civilians,” Rice said.

She was alluding to reports that Russian supply ship, the Professor Katsman, docked in the Syrian port of Tartus last Saturday with a cargo of munitions.

Russia’s UN ambassador Vitaly Churkin rejected criticism of the arms sales to its Syrian ally insisting they were legal and had no bearing on the current conflict.

Russian President Vladimir Putin was due in Berlin later on Friday as Western pressure for a toughening of his government’s position mounted.

“Russia and its stance towards the Assad regime plays a key role in the Syrian crisis,” German Foreign Minister Guido Westerwelle told Die Welt ahead of Putin’s arrival for talks with Chancellor Angela Merkel.

“In our view Russia should recognise that we are not working against Russian strategic interests when we want to stop the violence in Syria,” he said.

US Secretary of State Hillary Clinton warned on Thursday that Russia’s stance could tip Syria into civil war.

The Russians “are telling me they don’t want to see a civil war. I have been telling them their policy is going (to) help to contribute to a civil war,” she said.