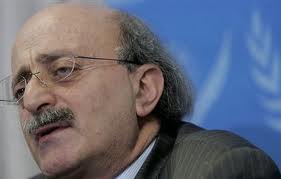 According to a report published on Friday by al Jamhouriyeh newspaper Progressive Socialist party Leader MP Walid Jumblatt and MP Akram Chehayyeb have been targeted for assassination but the Lebanese Internal Security forces foiled the plots more than once.

According to the sources of the daily as long as Jumblatt maintains his attacks against the Syrian regime of Bashar al Assad he will remain a target.

Jumblatt’s father the late Kamal Jumblatt was assassinated by the Syrian regime of Hafez al Assad, (Bashar’s father ), on March 16, 1977 as he was heading from his home in Mukhtara in Mt Lebanon to Beirut