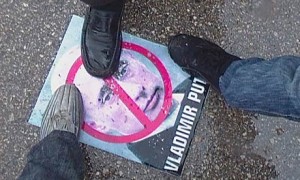 Hopes of a new international initiative over Syria have suffered a setback after a Russian minister ruled out any action by the UN Security Council soon.

Russia “categorically” opposed foreign intervention in Syria, he said, as outrage grew over the massacre of 108 people in Houla last week.

UN observers have verified what appears to have been another multiple killing.

Thirteen bodies were found in al-Sukar, east of the city of Deir al-Zour, with their hands tied behind their backs and signs that some had been shot in the head from close range.

Maj Gen Robert Mood, head of the UN observer mission which recently deployed in Syria, said he was “deeply disturbed by this appalling and inexcusable act”.

Thousands of people, perhaps as many as 15,000, have been killed since the revolt against the rule of President Bashar al-Assad began in March of last year.

China and Russia, which both wield a veto at the UN Security Council, have blocked two previous resolutions calling for tougher action on Damascus.

On Tuesday, French President Francois Hollande said military intervention authorised by the Security Council had not yet been ruled out.

The US state department expressed hope that the events in Houla might prove a “turning point in Russian thinking”.

Russian Deputy Foreign Minister Gennady Gatilov said: “We have always said that we are categorically against any outside interference in the Syrian conflict because this will only exacerbate the situation for both Syria and the region as a whole.”

Syria’s main opposition group, the Syrian National Council, said Russia had chosen “to join ranks with the Syrian regime and to provide it with political cover”, AFP news agency reports.

Aside from the discovery of the bodies in Deir al-Zour, opposition activists said at least nine people had died on Wednesday.

There were reports of shelling by security forces in Homs and villages nearby, and shelling in Douma, a Damascus suburb.

Turkey’s move goes further than Tuesday’s co-ordinated action by other states, which restricted their expulsions to the most senior staff. However, Syrian consular staff in Istanbul will remain.

In apparent retaliation for the diplomatic expulsions, Syria gave the Dutch charge d’affaires – one of the few remaining top-level Western diplomatic representatives in Damascus – 72 hours to leave.

In another development, Syria’s honorary consul in California, Hazem Chehabi, resigned, saying he could not continue in his post after the “barbaric” massacre in Houla.

Troops, tanks and artillery were all supposed to have been withdrawn to barracks in April as the first step on the ground under six-point peace plan of UN and Arab League envoy Kofi Annan.

But it simply has not happened, says the BBC’s Jim Muir in neighbouring Lebanon.

Amid the reports of continuing violence, it appears Mr Annan’s talks with President Bashar al-Assad and opposition figures in Damascus on Tuesday have had no immediate impact on the ground.

Mr Annan’s deputy, Jean-Marie Guehenno, is due to report to the UN Security Council on Wednesday on the talks with Mr Assad.

Forty-nine children and 34 women were among those killed in Houla last Friday and Saturday.

Witnesses have told the UN the vast majority of killings were committed by pro-government shabiha militiamen.

The UN Human Rights Council will hold a special session on Syria on Friday looking into the killings, officials said.