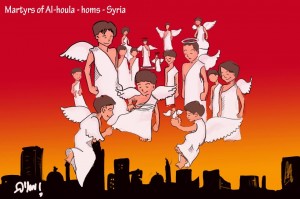 The U.N. Security Council on Sunday blamed the Syrian government for attacking residential areas of the town of Houla with artillery and tank shelling and also condemned the close-range killings of civilians there — but avoided saying who was responsible for the massacre of more than 100 men, women and children.

The council said in a press statement after an emergency meeting that the “outrageous use of force” against civilians violated international law and Syrian government commitments under previous U.N. resolutions to stop all violence, including the use of heavy weapons in populated areas. It said “those responsible for acts of violence must be held accountable.

It demanded that the Syrian government immediately halt the use of heavy weapons and pull its troops out of cities and towns, and it asked U.N. Secretary-General Ban Ki-moon and the U.N. observer mission in Syria to continue investigating the attacks in Houla. Ban, in a letter to the council, called for “a transparent, independent and impartial international investigation.”

Britain and France had proposed issuing a press statement condemning the attack on civilians and pointing the finger at the Syrian government for Friday’s massacre. But Russia called for an emergency council meeting saying it first wanted a briefing by Gen. Robert Mood, the head of the unarmed U.N. observer mission.

After Mood’s briefing, Germany’s U.N. Ambassador Peter Wittig said “there is a clear footprint of the government in the massacre.”

Britain’s U.N. Ambassador Mark Lyall Grant said no circumstances justify the use of heavy weapons, which Mood confirmed. “The fact is that this is an atrocity and it was perpetrated by the Syrian government,” he said.

But Russia’s deputy U.N. ambassador Alexander Pankin said “it still remains unclear what happened and what triggered what.”

“It’s difficult to imagine that the Syrian government would not only shell and mortar but also use point-blank execution against 40 plus women and 30 plus children under age 10,” he said. “This is definitely the atrocity that has to be investigated.”

Russia, which considers Syria its closest Mideast ally, has used its Security Council veto power to block resolutions raising the possibility of U.N. action against President Bashar Assad. The assault on Houla was one of the bloodiest single events in Syria’s 15-month uprising against Assad’s regime.

While a Security Council press statement is weaker than a presidential statement, which becomes part of the council record, or a legally binding U.N. resolution, it must be approved by all 15 members and therefore reflects strong council backing.

“We got a very strong statement and strong support from the Security Council,” U.S. deputy ambassador Rosemary DiCarlo told AP. “I think it’s very clear that everyone is absolutely appalled at the atrocities that took place and the council understands we need to be unified in this regard.”

The Syrian government on Sunday denied responsibility for the Houla massacre, blaming the killings on “hundreds of heavily armed gunmen” who also attacked soldiers in the area.

Syria’s U.N. Ambassador Bashar Ja’afari called the massacre “an appalling, horrific, unjustified and unjustifiable crime” and blamed “armed terrorist groups.” He said “it was not a coincidence” that the massacre took place just before international envoy Kofi Annan is scheduled to arrive in Syria.

He said those who committed the massacre were “seeking escalation and mobilization by the Security Council against the Syrian government.”

Russia’s Pankin said there is definitely “a third force” operating in Syria — terrorists or external forces who want intervention and an opposition victory.

Mood told the closed-door council session that U.N. observers, after revisiting the scene in the Houla area, had raised the death toll to 108 people, U.N. peacekeeping chief Herve Ladsous said outside the council chamber. Those killed include 49 children and 34 women, Ahmad Fawzi, a spokesman for international envoy Kofi Annan, told the AP. Mood said Saturday that observers confirmed from an examination of ordnance found at the scene that artillery and tank shells were fired.

The council statement “condemned in the strongest possible terms the killings, confirmed by United Nations observers, of dozens of men, women and children and the wounding of hundreds more in the village of Houla, near Homs, in attacks that involved a series of government artillery and tank shellings on a residential neighborhood.”

It also “condemned the killing of civilians by shooting at close range and by severe physical abuse,” but avoided assessing responsibility for the killings.

In his letter to the Security Council, Ban said villages in the Houla area have been outside government control but surrounded by a heavy Syrian military presence.

When U.N. observers visited the area on Saturday, a day after the attacks, Ban said they saw 85 corpses in a mosque in Taldou and “observed shotgun wounds and wounds consistent with artillery fire.” He said “the patrol also saw artillery and tank shells, as well as fresh tank tracks” and observed that “many buildings had been destroyed by heavy weapons.”

In other mosques, he said the observers saw three bodies, including a woman and an infant with gunshot wounds, and four other bodies “with severe facial injuries.” They also helped secure the return of between six and eight corpses from a government checkpoint to Taldou, which “bore signs of severe physical abuse.”

Ban and his predecessor Annan, the joint U.N.-Arab League envoy to Syria, issued a statement Saturday condemning the “indiscriminate and disproportionate use of force” in violation of international law and Syrian commitments to stop using heavy weapons in populated areas. They demanded that the Syrian government stop using such weapons.

Activists from Houla said Saturday that regime forces had shelled the area after large demonstrations against the regime on Friday. That evening, they said, pro-regime fighters known as shabiha stormed the villages, gunning down men in the streets and stabbing women and children in their homes.

The Houla attacks have sparked outrage from American and other international leaders, and renewed concerns about the relevance of a 6-week-old international peace plan negotiated by Annan that has not stopped almost daily violence despite the presence of more than 270 U.N. observers. The U.N. put the death toll weeks ago at more than 9,000. Hundreds have been killed since.

U.N. human rights chief Navi Pillay said Sunday that the “indiscriminate and possibly deliberate” killing of villagers in the Houla area may amount to crimes against humanity or other international crimes.

Looking ahead, Lyall Grant said that when Annan visits Damascus, reportedly on Monday, he will be “looking at the circumstances in which a political dialogue can be launched.”

The Security Council will be meeting on the Middle East on Tuesday and to hear a briefing from Annan on Wednesday and Lyall Grant said members need to have “a serious, strategic discussion about what next” for Annan’s six-point peace plan to end the 15-month conflict and what measures the council can take to support him.