Tehran plays down the discovery of bomb grade uranium 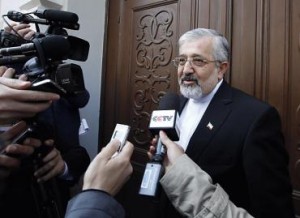 Ali Asghar Soltanieh, Tehran’s envoy to the International Atomic Energy Agency, was responding to a report by the U.N. nuclear watchdog that said it had found radioactive traces at an Iranian nuclear site. The uranium found had been enriched to a level that is slightly closer to the threshold needed for nuclear weapons than Iran’s previous highest-known enrichment grade.

The IAEA said in the confidential report that it was asking Tehran for a full explanation about the traces found at the Parchin site. But the report was careful to avoid any suggestion that Iran was intentionally increasing the level of its uranium enrichment.

Tehran said the find was a technical glitch, according to the report. Analysts and diplomats said Iran’s version sounded plausible.

The West suspects Iran is pursuing a weapons program. Tehran denies the charge, saying its nuclear program is aimed at peaceful purposes such as power generation and cancer treatment.

Soltanieh said the report on Iran’s nuclear activities was “historic evidence” that proved the peaceful nature of Iranian nuclear activities, while the uranium discovery was blown out of proportion for political reasons.

“This issue shows that some intend to damage the existing constructive cooperation between Tehran and the International Atomic Energy Agency,” he was quoted as saying.

The higher the enrichment, the easier it becomes to re-enrich uranium to the 90 percent needed for weapons grade. As a result, the finding of traces at 27 percent at the Fordo enrichment plant in central Iran sparked international interest.

The report cited a May 9 letter from Iranian officials suggesting any enrichment at 27 percent was inadvertent. The letter said the particles were produced “above the target value” and could have been for “technical reasons beyond the operator’s control.”

IRNA also reported that Iran’s nuclear chief, Fereidoun Abbasi, said Saturday that Tehran will not open Parchin until the agency convinces the country it is necessary.

“If a visit to Parchin is to happen, they should convince us in advance. So far, no reason and evidence has been handed to us,” Abbasi was quoted as saying.

After a short visit to Tehran last week, IAEA’s director general, Yukiya Amano, said Iran and the agency will sign an agreement on inspection of the site soon.

Iran and the world powers agreed to continue their talks in Moscow later in June after they held another round of negotiations on the Tehran’s nuclear program in Baghdad last week, the second in 2012 after a long stall since early 2011.