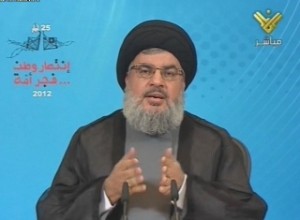 Hezbollah Secretary General Sayyed Hassan Nasrallah made another TV appearance via video link to deliver a speech on the occasion marking the Liberation Day.

“The people and leadership of the South have always called on the state to defend them and stop the Israeli aggressions. But the state never responded to these calls.”

“We want to remind you that the people of the South had to buy weapons and carry out their national duty amid the absence of the Lebanese state.”

He stressed that this occasion should be celebrated by all The Lebanese , not only the Shiites.

“Today, we also witness a good ending to a sorrowful incident. It was confirmed that the [Lebanese pilgrims that were abducted on Tuesday in Syria] are on their way to the Rafik Hariri International airport.”

He thanked all those who helped in releasing them.

“On behalf of the relatives of the abductees we thank those who contributed to the release.”

He also thanked Turkish President Abdallah Gul and Prime Minister Recep Tayyip Erdogan for their help in releasing them. 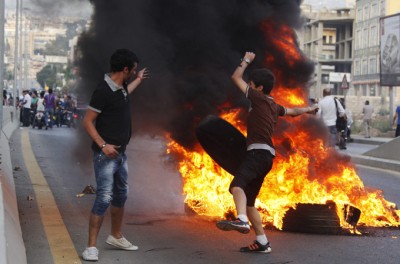 Commenting on the blocking of the main roads throughout Lebanon by Hezbollah supporters in the aftermath of the kidnappings he said :

“I also thank all the people who controlled their emotions and responded to our call for calm, wisdom and patience” and added :

“Protesting and blocking roads is useless, this is a sin and it is unethical. What good did it do? The abductors were not Lebanese… who were you trying to pressure? I call all people to abstain from such acts if in the future such an incident would reoccur.”

“We also ask those in charge of the pilgrimage trips to stop organizing trips by land. This time people controlled their emotions, next time we do not know what might happen. We ask people to go on pilgrimages by air. ”

Earlier today Lebanon Speaker Nabih Berri also urged Iraq and Iran to limit the pilgrimage for Lebanese Shiites to their holy sites to air travel. According to An Nahar newspaper the speaker contacted Iraqi Ambassador to Lebanon Omar al-Barzanji and Iranian Ambassador Ghazanfar Roknabadi to demand an end to all visits by land.

He addressed the the abductors by saying :” kidnapping innocent people harms your image and contradicts all you say you are working to achieve.”

“If this kidnapping operation seeks to pressure us into changing our stance, it will not work.”

The Syrian opposition Wednesday condemned the kidnapping of Lebanese Shiite pilgrims near the northern Syrian city of Aleppo and called for their immediate release.

Update: The kidnapped Lebanese will be arriving at Beirut airport on board the private jet of former PM Saad Hariri. The jet reportedly left from Cyprus to pick them up.