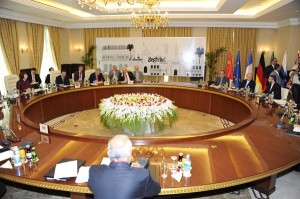 Hopes for quick progress on Iran’s disputed nuclear program faded rapidly  Wednesday, as diplomats from six world powers and Iran collided bitterly in daylong talks intended to resolve their differences over an effort many nations fear is aimed at building a nuclear bomb.

In their second high-level meeting in as many months, representatives of the two sides  offered packages of proposals designed to open a path to what is expected to be a long and difficult negotiation. But the yawning gap between the parties quickly became apparent.

The world powers pushed Iran to give up key pieces of its nuclear program, while Iran complained that they were not offering a “balanced” proposal.

After discussions that lasted from 1 p.m. to midnight at a government guesthouse in Baghdad’s international zone, a senior Obama administration official acknowledged to reporters that “this has been a difficult day.”

Though the two sides agreed to reconvene in the morning, the clash underscored how far the parties have to go to reach even the interim “confidence building” agreement that some U.S. officials had hinted might soon be within reach.

U.S. officials said the difficult exchanges were not surprising and might be a sign that the two sides are finally willing to engage candidly over their differences.

But if the talks collapse, as they did in January 2011, the consequences could be dire. Israel and the United States have both said they might turn to military action to halt the Iranian program if diplomacy does not provide assurances that Iran is not trying to build a bomb.

U.S. officials demanded in their proposal that Iran halt production of uranium enriched to 20% purity, a material that can be converted relatively easily to use in a nuclear bomb. They also asked that Iran surrender its stockpile of that material and dismantle an underground enrichment site near Qom where uranium is being enriched to 20%.

The world powers –- the United States, Britain, France, Germany, Russia and China -– offered to refrain from imposing further United Nations sanctions on Iran, but did not offer to suspend the tough U.S. and European sanctions on Iran’s central bank and oil sales that have sent the Iranian economy into a tailspin in the last six months.

Officials have said they could take such steps only after Iran took irreversible steps to curb its nuclear program and came into compliance with U.N. Security Council resolutions.

Iran responded with its own package of five proposals, some dealing with the nuclear program and others with nonnuclear issues. But Iranian officials immediately began saying  the world powers’ proposal was not “balanced,” the government-controlled Islamic Republic News Agency reported.

Iranian officials have repeatedly pressed in recent months for the world powers to provide relief on the sanctions, and have declared that enrichment is their right under the landmark Nuclear Nonproliferation Treaty, to which they are a signatory.

The senior administration official, who declined to be identified because of the sensitivity of the subject, said the conflicts were not just about the sanctions, but also about the powers’ demands regarding the 20% enrichment and other issues.

“I would have expected nothing but for them to say that this was ‘unbalanced,’ ” the official said. “This is a negotiation in which we both want to get the most and give the least.”

But the official added that the harsh words were a sign that, unlike in the past, when the two sides have often avoided direct discussion, “you’re getting down to the issues that matter.… I take that as a good sign, not a bad one.”