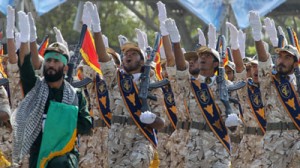 Intent on weakening Iran economically, the Senate on Monday approved tough new penalties on the Tehran regime to thwart its nuclear ambitions.

By voice vote, the Senate backed the measure ahead of talks between leading nations and Iran in Baghdad on Wednesday. The bill would target Iran’s Revolutionary Guard Corps, require companies that trade on the U.S. stock exchange to disclose any Iran-related business to the Securities and Exchange Commission and would expand penalties for energy and uranium mining joint ventures with Tehran.

The bill also would deny visas and freeze assets on individuals and companies that supply Iran with technology that could be used to crack down on its citizens, such as tear gas, rubber bullets and surveillance equipment.

The House passed its version of sanctions legislation in December.

Both the Obama administration and the international community have imposed tough sanctions on Iran over its nuclear development program, which Iran maintains is for peaceful purposes only.

“Any comprehensive policy that seeks to end Iran’s effort to acquire a nuclear weapon needs to convince the rulers in Tehran that their survival is in question,” Senate Minority Leader Mitch McConnell, R-Ky., said in a statement. “While sanctions are one part of convincing the Supreme Leader that the costs of pursuing this weapon outweigh any perceived benefit, Senate Republicans insisted that the Senate pass nothing less than the president’s commitment that all options are on the table, in order to prevent any contrary perception that silence on the use of force would have created.”

Last Thursday, Senate Republicans blocked consideration of the bill, insisting that it include language stating that the use of military force is an option, as Obama has said. Negotiations through the weekend produced a bill that was acceptable to Democrats and Republicans.

Sen. Bob Menendez, D-N.J., a leading proponent of tough penalties on Iran, said the legislation sends a clear message to Tehran in advance of the talks: “Provide a real and verifiable plan for the complete dismantling of your nuclear weapons program, or Washington will further tighten the economic noose.”

Said Sen. Mark Kirk, R-Ill., “Today the U.S. Senate put Iranian leaders on notice that they must halt all uranium enrichment activities or face another round of economic sanctions from the United States.”

Last year, the Senate voted 100-0 for a measure sponsored by Menendez and Kirk and added to the annual defense bill that targeted financial institutions that do business with Iran’s Central Bank. President Barack Obama signed the wide-ranging defense bill on Dec. 31.

Among the provisions of the legislation is an expansion of U.S. sanctions to include companies involved in joint energy ventures anywhere in the world in which Tehran is a significant partner or investor. The penalties also would apply if Iran receives energy technology or information that wasn’t previously available to the government.

Penalties also would be imposed on companies involved in a joint venture with Iran in the mining, production or transportation of uranium. Individuals who agree to abandon such projects within six months would be exempt from the penalties.

The legislation would require the president to identify and designate officials, affiliates and agents of the Revolutionary Guard Corps. These individuals would be subject to sanctions and barred from the United States. Individuals or companies that engage in transactions with the Revolutionary Guard Corps, even through bartering, also would be subject to sanctions.

Penalties also would be mandatory for shippers or insurers who knowingly aid the shipment of materials that contribute to Iran’s weapons of mass destruction or terrorism-related activities.

Senate Majority Leader Harry Reid, D-Nev., attempted on March 27 to secure quick approval of the legislation with no amendments, but Sen. Rand Paul, R-Ky., pushed to add language stating that the bill was not an authorization to use military force. Reid also faced a challenge from Kirk, who pressed for nine additional changes.

The new version of the bill includes elements of amendments that Kirk and Menendez had proposed, including tougher sanctions against companies that engage in or back censorship in Iran.

In a letter to Senate leaders last week, the American Israel Public Affairs Committee, the powerful pro-Israel lobby, praised the bipartisan legislation and Congress for forcing “Iran’s leaders to face the choice between compliance with its international obligations and international opprobrium.”

Other issues are certain to be part of a House-Senate conference to produce a final version of the legislation.

In its letter, AIPAC thanked Menendez and Kirk for deferring their amendments to the conference committee to ensure that the legislation moved ahead. It urged Senate leaders to give their proposed changes careful consideration during negotiations with the House.