Berjawi: No one can force us out of Tariq al-Jedideh 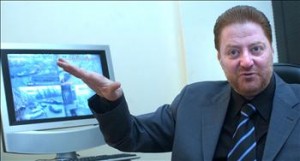 Arab Movement Party leader Shaker al-Berjawi said on Monday that “no one can force us out of Tariq al-Jedideh,” a day after clashes in the Beirut neighborhood left two people dead and 18 wounded.

Berjawi, whose office near the Arab university was destroyed during the clashes added that he would sue former PM Saad Hariri, Future bloc leader MP Fouad Siniora and Future Movement Secretary General Ahmad Hariri for the attack against his party’s office in area.

“One hundred gunmen shot at the office,” Berjawi said, adding that “[guards] from Saad Hariri’s residence participated” in the attack against the party’s office.

According to Al Jadeed TV an unmarked Hezbollah vehicle ( no number plates but with very dark tinted windows) picked up Berjawi, a close ally of Syria in the middle of the night from his office and whisked him to safety in neighboring al Dhahiye( Hezbollah’s stronghold south of the capital).

Beirut MPs on Monday condemned the clashes that took place in Tariq al-Jedideh and accused the Syrian regime loyalists of being behind them.

“The Beirut MPs condemn the clashes that were [started] by some people loyal to the Syrian regime in the context of Syria’s plan to transfer its crisis to Lebanon, especially after the Syrian foreign ministry’s letter to the UN,” Future bloc MP Nohad Al-Mashnouq said following the meeting.

The MPs also said that they hold Prime Minister Najib Mikati responsible for what happened in Beirut and northern Lebanon and called on him to resign.

The statement also called on the residents of Beirut to “bear their responsibilities, remain calm and avoid being dragged into any conflict.”

On Sunday, army troops shot dead a Sunni cleric when his convoy allegedly failed to stop at a checkpoint in North Lebanon, the scene of deadly clashes linked to the uprising in Syria.