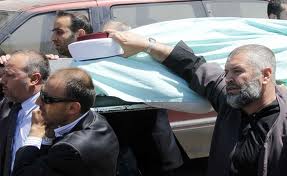 Mourners fired guns in the air as thousands poured into the streets Monday in northern Lebanon for the funeral of a Sunni Muslim cleric, whose killing sparked intense clashes in Beirut and raised fears the crisis in Syria was spilling across the border.

The Beirut street battles killed at least two people and wounded 15 overnight, and were the most serious clashes in the capital in four years.

The streets were calmer by Monday morning but some shops remained closed and many parents kept children home from school.

The violence in Beirut’s neighborhood of Tariq Jadidah erupted hours after Sheik Ahmed Abdul-Wahid and his bodyguard were shot dead at a checkpoint in northern Lebanon. Abdul-Wahid was an anti-Syrian regime cleric.

Police commander Maj. Gen. Ashraf Rifi toured the neighborhood Monday and told reporters that “things will be getting better.” He said police and army forces sent patrols into Tarik Jadidah to “reassure the people.”

Authorities braced for the possibility of more violence Monday in the north, during Abdul-Wahid’s funeral. Gunmen carrying automatic rifles shouted for the downfall of the Syrian regime in the cleric’s hometown of Bireh.

The fighting underscores how the bloodshed in Syria, where President Bashar Assad’s regime is cracking down on an uprising against his rule, can fuel violence across the border.

Lebanon has a fragile political fault line precisely over the issue of Syria.

There is an array of die-hard pro-Syrian Lebanese parties and politicians, as well as support for the regime on the street level.

There is an equally deep hatred of Assad among other Lebanese who fear Damascus is still calling the shots here. The two sides are the legacy of Syria’s rule over Lebanon from 1976 to 2005 and its continued influence since.

Thousands poured into a square outside a mosque in Bireh to take part in the funeral. 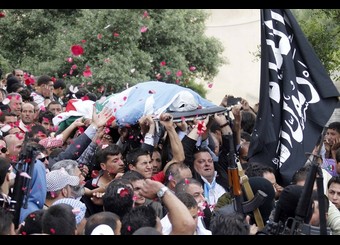 The cleric’s coffin, which was brought to his home, was covered with a Lebanese flag and the flag used by the Syrian revolution.

Men shouted “Down with Bashar!” and said the Syrian leader was trying to “transfer the crisis to Lebanon.” Scores of men opened fire with their rifles in the air as a sign of mourning.

Most businesses and schools were closed northern Lebanon after local officials called for a general strike to protest the cleric’s killing.

The circumstances surrounding Sunday’s shooting death of Shiekh Abdul-Wahid remained unclear but the state-run National News Agency said the cleric and his bodyguard appeared to have been killed by soldiers after their convoy failed to stop at an army checkpoint.

The Lebanese army on Sunday issued a statement, saying it deeply regretted the incident and that a committee will investigate.

It also called for referring the killing to the Judicial Council, which is charged with cases seen as destabilizing national security.

Lebanon and Syria share a complex web of political ties and rivalries, which can easily turn violent. Last week, clashes sparked by the Syrian crisis killed at least eight people and wounded dozens in the northern city of Tripoli.

A judicial official said Monday that 21 soldiers, including three officers, were being questioned by military police in relation to the sheikh’s death.

The Lebanese opposition has accused Assad of seeking to sow chaos in Lebanon in order to relieve the pressure on his embattled regime.

Amid fears the situation might deteriorate, four Gulf countries – Kuwait, Qatar, Bahrain and United Arab Emirates – have warned their citizens against travel to Lebanon.

The U.S. embassy in Lebanon also advised its citizens of the potential for continued demonstrations, road blockages and violence during the three days of mourning called for Wahid’s death.

Derek Plumbly, the U.N. special coordinator for Lebanon, expressed concern over the latest violence and urged dialogue between the rival parties in Lebanon.

“Differences must be addressed through dialogue, not resort to violence,” he said in a statement.

Syria long held sway in Lebanon politics and had troops stationed in the country for 29 years until it was forced to withdraw them in 2005 following the assassination of ex-premier Rafiq Hariri.

It has denied accusations that it was involved in his killing.

More than 12,000 people, the majority of them civilians, have died in Syria since an anti-regime revolt broke out in March last year, according to the Syrian Observatory for Human Rights.