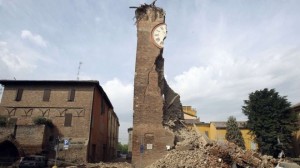 A magnitude-6.0 earthquake shook several small towns in northeast Italy Sunday, killing four people, knocking down a clock tower and other centuries-old buildings and causing millions in losses to the region known for making Parmesan cheese.

The quake struck at 4:04 a.m., with its epicenter about 35 kilometers (22 miles) north of Bologna at a relatively shallow depth of 5 kilometers (3.2 miles), the U.S. Geological Survey said. Civil protection agency official Adriano Gumina described it as the worst quake to hit the region since the 1300s.

The four people killed were factory workers on the overnight shift when their buildings, in three separate locations, collapsed, agency chief Franco Gabrielli said, In addition, he said, two women died — apparently of heart attacks that may have been sparked by fear. Sky TG24 TV reported one of them was about 100 years old.

Two of the dead were workers at a ceramics factory in the town of Sant’Agostino di Ferrara. Their cavernous building turned into a pile of rubble, leaving twisted metal supports jutting out at odd angles and the roof mangled.

“This is immense damage, but the worst part is we lost two people,” fellow worker Stefano Zeni said. News reports said one of the dead had worked the shift of an ill colleague. Elsewhere in the town, another worker was found dead under factory rubble.

Premier Mario Monti, in Chicago for the NATO summit, told reporters he was returning to Italy before the meeting ends because of the quake. 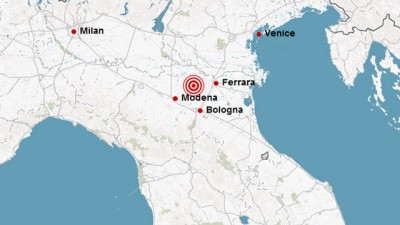 The quake struck in the farm region known for production of Parmigiano and Grana cheeses. Italy’s farm lobby Coldiretti said that some 200,000 huge, round cheeses were damaged, causing a loss to producers of €50 million ($65 milion).

It also said in a statement that at least three barn roofs collapsed, trapping an unspecified number of pigs and milk cows inside.

Emilio Bianco, receptionist at Modena’s Canalgrande hotel — housed in an ornate 18th-century palazzo — said the quake “was a strong one, and it lasted quite a long time.” The hotel suffered no damage and the Modena province itself was spared, but guests spilled into the streets as soon as the quake hit, he said.

In Sant’Agostino. resident Alberto Fiorini said there was “pandemonium” during the night. “I took shelter under the bed and I prayed,” he said.

Mohamed Atzerc, also from Sant’Agostino, said he had feared for the safety of his three small children.

“They were crying. A wardrobe collapsed in front of the door. The light went out and I thought that everything was collapsing on my children,” who were unharmed, he said.

Many people were still awake at 4 a.m. and milling about town since stores and restaurants were open all night.

The epicenter was between the towns of Finale Emilia, San Felice sul Panaro and Sermide, but the quake was felt as far away as Tuscany and northern Alto Adige.

One woman on the outskirts of Finale Emilia told Sky her 5-year-old daughter was trapped on her bed by the bricks of a 14th-century tower that toppled onto their home.

Firefighters and other rescuers freed the child without a scratch after two hours. A supporting beam had protected her from falling rubble, rescuers and the mother said.

Nearly 12 hours after the quake, a sharp aftershock alarmed the residents of Sant’Agostino di Ferrara and knocked off part of a wall of city hall. The building already had been pummeled by the pre-dawn quake, which left a gaping hole on one side of it.

The same aftershock knocked down most of the clock tower in the town of Finale Emilia, injuring a firefighter and leaving only half the clock affixed. Sky TG24 showed the firefighter lying in the street near the rubble. The national geophysics institute assigned an initial magnitude of 5.1 to the aftershock.

The quake Sunday came as Italy was still reeling from Saturday’s bombing that killed a 16-year-old girl at a school in the country’s south.

Pope Benedict XVI, in his traditional Sunday appearance from his studio window overlooking St. Peter’s Square, said he was “spiritually close” to those affected by the quake, and asked people to join him in prayers for the dead and injured.

The initial quake was followed around an hour later by a 5.1-magnitude temblor, USGS said. It was preceded by a magnitude-4.1 temblor.

In 2009, a temblor killed more than 300 people in the central city of L’Aquila, where the historic center is still largely uninhabited and in ruins.