Akkar Muslim clerics call for a strike on Monday 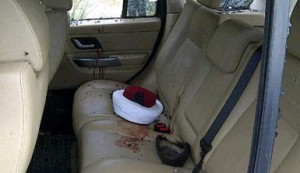 The muftis and clerics of Akkar on Sunday called for a general strike across Lebanon to protest against the killing on Sunday of Sheikh Ahmed Abdel Wahid at an army checkpoint in the Akkar town of al-Kweikhat.

“We call for a general strike tomorrow across Lebanon and for three days of mourning over the slain sheikh,” said a statement issued by Akkar’s muftis and clerics.

They stressed that they will not allow any side to stir a strife between the Lebanese citizens and the military institution.

“The department of Islamic endowment in Akkar calls for a probe to prevent the recurrence of such an abhorrent act and for slapping the culprits with the severest punishment possible,” added the statement.

The department said Abdel Wahid and his companion were killed at the hands of “those who are supposed to protect people’s lives and security,” describing the incident as a “dangerous precedent.”

Abdel Wahid was scheduled to make a speech at a Jamaa al-Islamiya rally in Halba. The event has since been called off. The party has also issued a statement denying its involvement in the rally.

Meanwhile the lawmakers of north Lebanon called on the residents of Akkar and the North to “practice self-restraint in order to prevent civil strife ”. They stressed that blocking roads by protesters “does not serve the interests of citizens,” adding that efforts were being exerted to reopen all roads. 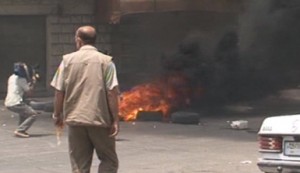 PM Nagib Mikati ordered the formation of an investigation committee to look into the killing. He also called for a security meeting at 6:30 pm at the Grand Serail.

Earlier on Sunday, MP Khaled al-Daher one of the north Lebanon lawmakers said no warning shots were fired as the vehicle crossed the checkpoint. He instead revealed that Abdel Wahid was shot in the head and neck, in a clear sign he was deliberately being targeted.

“Why was he attacked?” asked the MP. He accused some members of the army of committing “militia-like practices,” adding that some of them were allegedly keen on serving Syrian interests.

“It’s clear that those supporting Syrian President Bashar Assad are keen on weakening us, but we will not waver in defending Lebanon,” he declared.

“An order was made to kill Abdel Wahid,” he remarked angrily. He continued: “It’s unfortunate that the murder took place at the hands of some army members.”

“We hold the army and its commander responsible for this incident,” he stressed.

Earlier today Progressive Socialist Party leader MP Walid Jumblatt condemned the killing of Sheikh Abdel Wahid and called on Akkar residents not to fall into traps being set to them by the Syrian regime.

The PSP leader also called for launching an “immediate investigation” to punish the perpetrators.

The Lebanese Defense Minister Fayez Ghosn has been accused of colluding with the Syrian regime in its effort to prove that it is fighting terrorism in Syria. He claimed that al Qaeda members have been infiltrating Syria via Lebanon. His claim was completely denied by Lebanon interior minister Marwan Charbel.

Ghosn is a member of the Marada movement which is headed by MP Suleiman Franjiyeh , a close ally of Hezbollah and president Assad.

Charbel said Wednesday that there are individuals in Lebanon who sympathize with Al-Qaeda, but that the group as an organization does not exist in the country, does not have any bases and does not receive any funding.

“Al-Qaida doesn’t exist in Lebanon but there are people who support it. It doesn’t have a training base in the country nor does it receive funding ”Charbel told reporters in a news conference in Tripoli following the North Lebanon Security Council’s meeting at the Serail.