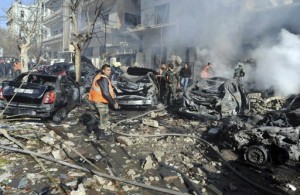 Military defectors in northern Syria have denounced claims that al-Qaida was behind a series of deadly bombings in Damascus, contradicting the UN secretary general’s assessment that the terror group is taking a lead in the insurgency.

The defectors were speaking before Ban Ki-moon’s claim on Thursday that al-Qaida was responsible for a deadly blast outside one of Syria’s top intelligence services on 10 May, which reportedly killed 55 people and wounded 372.

“A few days ago there was a huge, serious, massive terrorist attack. I believe that there must be al-Qaida behind it,” Ban said at the UN headquarters in New York. “This has created again very serious problems.”

The defectors, interviewed by the Guardian in villages in the Jisr al-Shughour and Jabal al-Zawiya areas this week, alleged that Syrian security forces had caused many of the blasts.

Nine defectors, some of them officers who had fled recently, relayed first-hand accounts of plots they had witnessed being planned or executed that were later blamed on “armed gangs” or al-Qaida.

All have provided details of the plots they say took place and are willing to provide testimonies to international investigators. They say they are reluctant to put their names to their allegations, fearing reprisals against their families.

Another man, who was serving in the destroyed intelligence headquarters known as the Palestinian branch, and who was injured in the 10 May blast, gave an account of regime compliance to his family and friends. The man, a guard at the headquarters’ prison, had returned to his village two days earlier after receiving treatment.

“He told us that three days before the bomb the Alawite officers started disappearing and so too did all of the important prisoners,” the man’s brother said. “The cameras were also taken down and the important files were removed. The only people left in the building when the explosion happened were Sunni officers and guards or some prisoners.”

The injured guard initially agreed to discuss with the Guardian his version of what took place, but promptly left the interview trembling and weeping.

“He knows the price we will all pay if he speaks out,” the brother said.

A non-commissioned officer who fled the feared air force intelligence on Tuesday said he had been responsible for the removal of cameras from the street outside the Palestinian branch a week before the explosion.

“This was the most secure part of Damascus,” he said in Jabal al-Zawiya village the following night. “Nothing can happen there without someone knowing.”

He said that despite removing the cameras, he had had no prior knowledge of a blast. He did claim to have witnessed an irregular mass transfer of staff from another security building that was blown up in late December, the first of the alleged al-Qaida attacks on the capital.

“I was working very near that area that morning,” he said. “They put an emergency car with a flashing light out the front of the building and there was a prisoner inside [the car]. It was impossible to get near the area for two hours before the explosion.”

Another officer, who defected in February, said he witnessed a van being loaded with explosives in al-Mustama military camp in northern Syria. “They then put prisoners in it and took it into town and exploded it,” the officer said. “For five days before, we knew [the explosion] was going to happen. But when I heard that they had killed the prisoners too, I left.”

A fourth officer, who served in the air force intelligence branch in Damascus and fled in January, said he had seen a car loaded with explosives being driven from his building by guards who were transporting prisoners.

“I left the military after that,” he said. “I could not take it any more.”

Across the swath of northern Syria visited by the Guardian this week, anger at the idea of al-Qaida being responsible was evident among the Free Syria Army and locals. “Show me one man from al-Qaida and I will buy you lunch,” said Firas Abu Hamza, a rebel commander in Jabal al-Zawiya. “There are no [Gulf] Arabs here helping us and there are no weapons coming in.

“This is our fight and our fight alone,” Abu Hamza said. “We will accept weapons, but we will not accept al-Qaida. It is totally impossible in this community for them to be there without us knowing.

“Have you seen those explosions in Damascus? They are massive, sophisticated, beyond our capabilities,” he said. “We tried to blow up a tank near a bridge last week with urea and sugar and barely damaged the tank. It is clear that a state is behind this.”