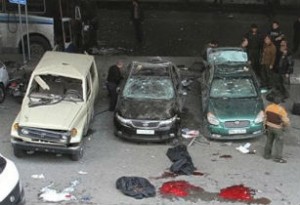 A suicide vehicle bomb tore through the parking lot of a military compound in an eastern Syrian city on Saturday, killing nine people in the latest in a series of blasts in recent months targeting security installations, the country’s state media reported.

State TV showed footage of damaged buildings, smoldering cars, and trucks turned upside down. Debris filled a street that was stained with blood.

Attacks such as the blast in Deir al-Zour, a former transit hub for militants heading to fight U.S. forces in nearby Iraq, have raised fears that al-Qaida-linked jihadis, possibly including Iraqis, have made strong inroads into Syria’s rebel movement.

The report said the vehicle was rigged with 1,000 kilograms (2,200 pounds) of explosives and did heavy damage to buildings up to 100 meters (yards) away. It added that the explosion left a crater five meters wide and 2 1/2 meters deep.

The state-run news agency SANA said the blast hit the parking lot of a military residential compound, while an opposition group, the Britain-based Syrian Observatory for Human Rights, reported that the bomb went off close to the city branches of the Military Intelligence Directorate and Air Force Intelligence. State TV said U.N. observers based in the city visited the site of the blast.

No one claimed responsibility for Saturday’s attack. A group calling itself the Al-Nusra Front has claimed some previous attacks through statements posted on militant websites. Little is known about the group, although Western intelligence officials say it could be a front for a branch of al-Qaida militants from Iraq operating in Syria.

The most recent bombing targeted an intelligence building in Damascus on May 10. It struck during morning rush hour and the high death toll — some 55 people — made it the deadliest such attack since the uprising against President Bashar Assad’s regime began in March of last year.

Some of the tactics used in Damascus — a small blast drawing attention prior to a larger one — were reminiscent of al-Qaida attacks during Iraq’s insurgency.

On Thursday, U.N. Secretary-General Ban Ki-moon said he believes that “alarmingly and surprisingly,” al-Qaida must have been behind the May 10 attack in the Syrian capital.

“The recent terrorist attacks in Damascus suggest that these attacks were carefully orchestrated,” he said. “Having seen the scale and sophistication of these terrorist attacks, one might think that this terrorist attack was done by a certain group with organization and clear intent.”

Deir el-Zour city is about 100 kilometers (60 miles) from the Iraqi border. Saturday’s blast came a day after the state-run news agency SANA reported that authorities foiled an attempt to blow up a car rigged with explosives in the city and detained those involved.

Deir el-Zour province, of which the city is the provincial capital, was a major crossing point for jihadis traveling to Iraq to fight after the 2003 U.S.-led invasion. During the war, the U.S. and the Iraqi government repeatedly accused Syria of allowing foreign fighters from across the Arab world to pass through, but Damascus said it could not stop smuggling networks from crossing the long desert border.

In 2008, a cross-border raid by U.S. special forces killed the al-Qaida-linked head of a smuggling network and seven other people in the province.