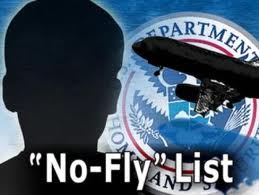 Lawyers for 15 Muslims in the United States barred from boarding commercial flights because they were on the U.S. “no-fly” list will on Friday ask a federal appeals court to reinstate their constitutional challenge of the anti-terrorism measure.

The plaintiffs, who are U.S. citizens or permanent legal residents, said they learned they were on the list when prohibited, without advance warning, from boarding a commercial airliner, and were later denied any means of petitioning the government to be removed from the roster.

“The government has created this secret list, and the people on the list have no way of defending themselves,” said Nusrat Choudhury, a lawyer for the American Civil Liberties Union (ACLU), who is representing the group, which filed a lawsuit against the U.S. government in June 2010.

The “no-fly” list, established in 2003 and administered by the FBI’s Terrorist Screening Center, includes some 20,000 people identified by the agency as known to have or reasonably suspected of having ties to terrorism. About 500 of them are U.S. citizens, according to an agency spokesman.

The plaintiffs, who are residents of Oregon and other states and include four veterans of the U.S. armed forces, deny any links to terrorism. “None of the plaintiffs pose any threat to airline security,” Choudhury said.

Their suit argues that the government violated their constitutional rights to due process and the U.S. Administrative Procedures Act by failing to provide notice of the reasons for their inclusion on the list and an effective means of contesting that status.

The ACLU is seeking to either remove the plaintiffs’ names from the list immediately, or allow them an opportunity to contest their inclusion on the roster.

A U.S. district court judge in Portland, Oregon, dismissed their suit, ruling the court lacked jurisdiction over the matter.

The ACLU appealed that decision to the 9th U.S. Circuit Court of Appeals, where a three-judge panel will be asked on Friday to decide the proper legal venue for the case.

The restriction has kept the 15 plaintiffs in this case from visiting family and traveling for work or study, the suit said. Several said they apparently were added to the list while traveling abroad, where they ended up stranded as a result.

The suit was originally filed in Portland because only one plaintiff – Mohamed Kariye, an imam at a large Portland mosque – was in the United States at the time. He has been prevented from leaving the country to visit his daughter in Dubai or other relatives in Somalia.

The government argues that there is already an adequate process in place for contesting an individual’s inclusion on the list, and that all the plaintiffs have used it. The government also has said none were permanently stranded in a foreign country.