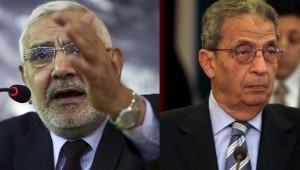 Two of the leading candidates to become Egypt’s next president clashed Thursday night in the Arab world’s first televised presidential debate, trading barbs about their political histories and arguments about the role of religion in public life.

Two weeks before the scheduled May 23 start of the election to choose the first president since the ouster of Hosni Mubarak, Abdel Moneim Aboul Fotouh, a former leader of the Muslim Brotherhood campaigning as a liberal Islamist, faced Amr Moussa, a popular former diplomat campaigning as the stable alternative to an “experiment” in Islamist rule.

Mr. Moussa, 75 and a more confident debater, was far more aggressive than Mr. Aboul Fotouh, 60. But neither candidate delivered a knockout punch as the debate turned repeatedly to the polarizing question of the status of Islam in governance.

Mr. Moussa sought repeatedly to drive a wedge into Mr. Aboul Fotouh’s unlikely coalition of secular-minded liberals, moderate Islamists and the ultraconservatives known as Salafis. “He uses double language,” Mr. Moussa charged. “He’s a Salafi with Salafis, he’s centrist with centrists, and he’s a liberal with liberals, and there’s a question mark.”

Mr. Aboul Fotouh tried to articulate an understanding of Islamic law, or Shariah, that emphasized individual freedoms and social justice. “There’s no contradiction between religion and citizenship, or religion and the Constitution, or religion and the state,” he said, arguing that Islamic law’s first requirement of government was to look after the material interests of the people.

At one point, Mr. Moussa tried to tar Mr. Aboul Fotouh for his role as a leader of a 1970s student movement that revitalized Islamist politics in Egypt, because it used the same generic name — the Islamic Group — as an unrelated later group that sought to use violence to bring down the government. “How do you live with all that blood?” Mr. Moussa asked.

And he repeatedly pressed Mr. Aboul Fotouh over the oath of loyalty he once swore to the chairman of the Muslim Brotherhood, the 80-year-old Islamist revival group whose political party now dominates Parliament. Mr. Aboul Fotouh said he left the oath behind when he was kicked out of the Brotherhood last year.

Both Mr. Aboul Fotouh and Mr. Moussa declared their support for the provision of the existing Egyptian Constitution, declaring that it is based on the principles of Islamic law.

Mr. Aboul Fotouh accused Mr. Moussa of complicity with the Mubarak government, for which Mr. Moussa worked as a diplomat for most of his career. “We are a revolution that broke out against a tyrant regime,” Mr. Aboul Fotouh said. “Those who take part in creating the problem couldn’t be part of the solution.”

Mr. Moussa countered, “When the regime has fallen, it fell with its men and I wasn’t one of them.”

Mr. Moussa said that he thought Mr. Mubarak was a better candidate than his son Gamal. Mr. Mubarak appeared to be maneuvering his son into position as an eventual successor, but Gamal never declared his candidacy.