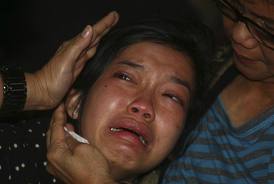 Wreckage from a Russian passenger plane that disappeared over west Java in Indonesia was found early Thursday morning on the western slope of Mount Salak at about the 5,000-foot level, Russian television news reported.

No survivors were found among the 45 people on board, including eight Russian crew members and 37 passengers from Indonesia, the United States, France and Italy. Indonesian paratroopers descended on the site from helicopters and found bodies in what was left of the plane, Moscow radio news reported. The remains will be taken to Indonesian clinics for DNA testing, the report said.

The Sukhoi Superjet 100 disappeared from radar Wednesday afternoon about 20 minutes into its second demonstration flight of the day, part of a promotional tour of Southeast Asia for the new aircraft.

The cause of the crash is unknown. The plane had an experienced crew led by the chief test pilot of the production company, officials said.

“The plane conducted about 500 flights with overall flight time of over 800 hours, and passed all kinds of necessary preparation,” Vladimir Prisyazhnyuk, president of Moscow-based Sukhoi Civil Aircraft, said in televised remarks.

This year alone, Sukhoi Civil Aircraft has signed contracts to supply three S-100s to Laos, three to Indonesia and four to Mexico, with the market capacity until 2017 estimated at over 6,000 planes, RIA Novosti said.

“It is a principally new quality plane and it is capable of taking Russian civil aviation to a new level,” Igor Korotchenko, editor-in chief of of the National Defense monthly journal, said in a phone interview. “I can’t believe in a technical fault or a human error in connection with the accident.”

But some experts said the crash raised a troubling possibility. The radio altitude meter that was supposed to warn of a potential collision with the ground may have failed to function properly when the plane approached Mount Salak, said Alexander Akimenkov, a former test pilot and currently senior member of the International Academy for Human Problems in Cosmonautics and Aviation, a Moscow-based research think tank.

“This tragedy outlined this critical problem of the plane equipment,” Akimenkov said in a phone interview. “True, the plane was assembled with about 85% of foreign-manufactured parts, but most of them are 20 and 30 years old.”

“This project is not a technological breakthrough its advocates love to say but the Trojan horse for the Russian aviation industry as it has already closed the road for many Russian projects by channeling the funds to foreign companies involved in the project.”

Akimenkov said that he knew the command pilot of the flight, Alexander Yablontsev. He described Yablontsev as an extremely self-confident and ambitious person who during the Soviet years underwent training as a cosmonaut.

Akimenkov said that after the investigation the producers of the S-100 may run into serious marketing problems. “And they can’t really sell their machine in Russia,” he said. “Because of its clearance and other factors, it is a regional plane not adapted for Russian conditions. Russia doesn’t need that plane.”

The Kremlin was considering buying one of the jets for its own needs, Viktor Khrekov, spokesman for the Presidential Affairs Department, said in an interview to Lifenews, an online publication. “Naturally, the fact of the crash makes us give it another thought. We will wait for the official conclusions.”

Photo: A relative weeps as she waits for the news on the missing Russian airplane at Halim Perdanakusuma airport in Jakarta, Indonesia, Thursday. The wreckage of the Sukhoi Superjet-100 passenger plane that went missing during a demonstration flight Wednesday near Jakarta was spotted Thursday in a mountainous area of West Java. (AP/Tatan Syuflana)