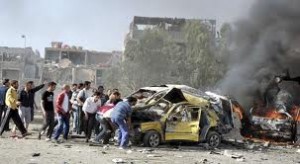 The bombings that tore through Damascus on Thursday morning were the sixth terrorist attack to have struck the city since December.

Five of those attacks have come in the last two months, further complicating the tenuous, and perhaps illusory, ceasefire and peace plan overseen by former UN Secretary General Kofi Annan.

Syria’s uprising began as a peaceful pro-democracy protest movement over a year ago. Under the pressure of a brutal government crackdown, parts of that movement morphed into an insurgency.

Now, one danger is that the protest movement and the armed insurgency both become overtaken by a campaign of terrorist violence designed to sow chaos and accelerate Syria’s political disintegration.

The Syrian government has attributed past bombings to al-Qaeda, with “Zionist-American” backing. Such claims are designed to reinforce the government’s narrative of an onslaught by jihadists and foreign powers.

President Bashar al-Assad has cast himself as protector of his country’s plethora of minority communities. As such, he wants to portray the opposition as little more than extremist Sunni terrorists, and stooges of the region’s powerful Arab states.

Indeed both groups – Sunni fundamentalists and Sunni-majority Arab powers like Saudi Arabia and Qatar – have come out strongly against Mr Assad’s regime, for both strategic and ideological reasons. Mr Assad’s message therefore resonates.

Many members of the Syrian opposition have instead argued that these bombings are the work of the government itself, in an effort to tarnish the opposition, deter foreign intervention and win the loyalty of fearful minorities.

The timing has indeed been suspect. December’s attack occurred just as an observer team from the Arab League arrived in Syria. Thursday’s blasts came just one day after a roadside bomb nearly hit a team of UN observers.

The implication is that the government may be seeking to deter foreign observers from travelling too freely or expanding their mission, as UN Secretary General Ban Ki-Moon has advocated.

Moreover, al-Qaeda does not have a history of mounting attacks on Syrian soil. Sunni Islamists in Syria once waged a bloody six-year insurgency, but the regime’s massacre at Hama in 1982 put an end to that.

In 2008, a suicide bombing in Damascus killed 17 Syrians, yet the perpetrator was never clear.

However, we should be wary of the idea that these bombings are “false flag” operations by the government.

American officials – who are hardly sympathetic to the Syrian government – have agreed that they see fighters linked to al-Qaeda in Iraq (AQI) as responsible for earlier bombings in Damascus and Aleppo, something reinforced by the method and targets of these attacks.

In fact, al-Qaeda and affiliated groups have both the motive and opportunity to exploit Syria’s fraught sectarian balance, just as they did in Iraq in 2006.

That year, the bombing of a Shia mosque in the city of Samarra sparked off a horrific civil war between majority Shias and minority Sunnis.

AQI used both Syrian manpower and supply lines. Today, those resources are almost certainly being turned back into Syria.

AQI made itself enormously unpopular in Iraq by unleashing untrammelled violence against Iraqi civilians. Now, it may see a fresh chance to gain credibility and support in a fight against President Assad’s self-declared “secular” government.

That may be an especially attractive strategy at a moment when parts of the opposition are realising that no cavalry – whether Nato or the Arab League – is coming to rescue them.

In the short-term, this bombing will not change the underlying tactics of the armed parties. The regime is continuing its crackdown. Moreover, it is ignoring crucial elements of the peace plan – such as withdrawing its forces from population centres.

The armed opposition, having lost key territories like Homs to government offensives, has shifted to guerrilla tactics.

It is impossible to accurately assess the degree to which the opposition is still engaging in attacks on government forces today.

What is clear is that the rebels will not disarm so long as any political settlement looks fanciful. More recently, non-violent protest has found more space.

One possibility is that the most extreme parts of the opposition want to curb this form of resistance and ensure that the uprising remains wholly militarised.

The bombing places enormous pressure on the UN, which will be concerned for the safety of its staff. It may now be deterred from expanding the size and scope of its mission.

The dilemma for Western states is that they can see the Annan peace plan unravelling before their eyes, but are horrified by the prospect of becoming militarily involved in a conflict whose participants and details are growing dizzyingly complicated.

Yet, the pitifully small numbers of observers today have no chance of covering and documenting the full range of violence in the country.

The dilemma for Western states is that they can see the Annan peace plan unravelling before their eyes, but are horrified by the prospect of becoming militarily involved in a conflict whose participants and details are growing dizzyingly complicated.

Assad’s regional adversaries – Turkey, Saudi Arabia, Qatar and other Arab states – have postured a great deal, but done very little. They are still waiting for US leadership – and they may be waiting a long time.

The most insidious effect of this latest terrorist attack may be to widen the already severe sectarian fault-lines between Syria’s Sunni majority (who dominate the uprising) and its anxious minorities, including the Alawite sect of the Assad family.

That would have a highly destabilising effect on the country as a whole and its politically fragile neighbours, Iraq and Lebanon.

The growth of the jihadist strand of the opposition could derail not just the peace plan, which is likely to collapse soon enough anyway, but also the democratic aspirations and limited cohesion of the Syrian opposition.