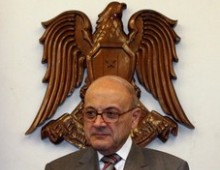 Secretary General of the Lebanese-Syrian Higher Council Nasri Khoury said that it is time for Syrian refugees in Lebanon to be returned to their country, al-Hayat newspaper on Thursday.

He was reportedly relaying a message from the Syrian leadership.

Khoury who is known for his bias towards the Syrian regime explained that calm has been restored to Syria after international monitors entered the country and the United Nations and Arab League ceasefire plan has been implemented.

Several ministers, who are allied to Damascus, had also demanded that they be returned to Syria out of fears that they may be harboring terrorists, the daily added

Meanwhile, the March 14 General Secretariat announced on Wednesday that it will head a delegation to visit the Bekaa town of Arsal to inspect the situation of the Syrian refugees.

The Lebanese-Syrian Higher Council should have been abolished long time ago and specially since Lebanon and Syria have established diplomatic relations, but Khoury who is a member of the Syrian Social Nationalist Party ( SSNP) ( which is closely allied with Hezbollah and Syria) continues to defend the continued existence of the council.

The exact number of Syrian refugees in Lebanon is not known but estimates range anywhere between 24, 000 to 50,000. Many of the refugees have relatives in Lebanon and for this reason they do not register with the UN refugee agency UNHCR.

According to UN estimates, more than 9,000 people have been killed in violence across Syria since anti-regime protests broke out in March 2011, while monitors put the number at more than 11,100, mostly civilians. All these estimates are history… the exact number is much much higher, according to Syrian witnesses coming from Homs and Idlib .

Today two strong explosions ripped through the Syrian capital Damascus , killing or wounding dozens of people and leaving scenes of carnage in the streets in an assault against a center of government power.

Lebanon government is currently dominated by the Iranian and Syrian backed Hezbollah militant group which has reportedly been helping the Syrian regime in its deadly crackdown against the pro democracy protesters.