Are terrorists the wild card in Syria’s power struggle? 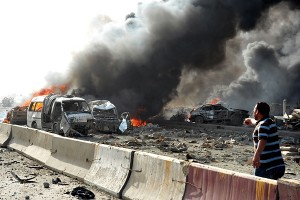 The twin suicide car-bombings that reportedly killed 55 people and wounded 372 in Damascus on Thursday prompted a familiar set of responses: State television blamed unspecified “terrorists” for the atrocity, in keeping with its habit of linking all anti-regime violence to jihadist extremism; opposition groups denied responsibility and instead accused the regime of staging the blasts as a propaganda exercise designed to ease international pressure to observe a U.N.-backed cease-fire. For both sides, the intended audience is the international community, playing the new political game in which both sides have publicly committed themselves to the cease-fire plan brokered by U.N. Special Envoy Kofi Annan, but neither is actually observing it — instead, each is maneuvering to ensure that the other side is blamed for the failure of a plan deemed by Annan to be the “last chance” to avoid a full-blown civil war.

The problem facing the opposition, however, is that its habit of blaming the Assad regime for every bomb blast has failed to convince either the core constituencies on which Assad is relying to keep himself in power — the Alawites, Christians and many urban middle-class Sunnis — or the Western powers on whose intervention the opposition is ultimately counting to tip the balance against the regime.

The violence is ongoing, of course. Security forces reportedly pummeled the opposition stronghold in Homs with artillery fire overnight Thursday, while Tuesday had seen a bomb detonated near a convoy escorting U.N. cease-fire monitors. Western governments are well aware of the Syrian regime’s capacity for dirty tricks and false-flag actions, and they concur that some reported “attacks” appear to have been elaborate stunts staged by the regime. But in other instances where the opposition has blamed spectacular terror attacks on the regime, Western governments have concluded that these were, in fact, the work of jihadist terror cells. And there’s plenty of evidence of the growing involvement of Sunni extremist groups from Lebanon and Iraq. Indeed, even local level anti-regime activists have complained of the involvement of foreign fighters on their turf, highlighting the problem of a lack of political control over those doing the fighting.

The leaders of Syria‘s anti-Assad opposition would certainly rather that the jihadist element in their midst didn’t exist, whereas their presence makes it easier for the regime in Damascus to push back against international pressure. Hence the opposition’s need to blame the regime for any attack that might look like the work of al-Qaeda type groups. Unfortunately for the opposition, Western governments have concluded that the presence of jihadist elements in Syria is very real and very dangerous — which reinforces their already substantial reluctance to intervene militarily on behalf of the rebellion as they did for Libya’s rebels.

Western leaders know the limits of Kofi Annan’s plan for a cease-fire and political dialogue: the regime obviously is not about to author its own destruction, and will therefore cherry pick its implementation of the Annan plan, ensuring that it doesn’t create conditions for Assad’s overthrow. In other words, it’s important for the low-key civil war to continue, because the regime knows it can prevail on the military front, whereas unrestrained freedom to protest peacefully could present it with a more complex challenge. But the jihadist element in the opposition is happy to oblige, knowing that a military contest allows it to be far more influential than a purely political one does.

A status quo that involves routine, daily sectarian warfare punctuated by the occasional spectacular atrocity may seem untenable, but Syrians need only to look next door to see that it’s quite possible that their sectarian power struggle becomes a new normality: Lebanon’s civil war, after all, lasted 15 years.

Photo : Damascus blasts . Syria said Thursday that the explosions were the work of suicide “terrorists” armed and funded by foreign organizations and media. “These crimes show that Syria is targeted by a terrorist attack launched by organizations armed and funded by parties who proclaim their backing to terrorist crimes,” state-run SANA news agency quoted the Syrian Foreign Ministry as saying.