Iran may have carried out a clean-up operation at a building suspected of being used for nuclear weapons experiments within a key military facility, experts warned last night. 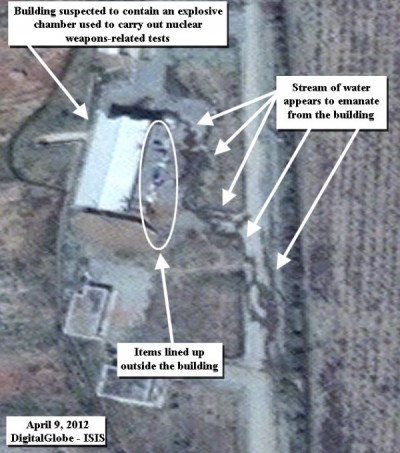 New satellite photographs appear to show that unusual activity has taken place in recent weeks at the Parchin site outside Tehran, according to the Institute for Science and International Security (ISIS).

A large stream of water pictured flowing from the building, said to feature an “explosive chamber” for testing, “raises concerns that Iran may have been washing inside the building”, according to the group.

A series of unidentified items were also shown lined up outside the building in the April 9 photographs. Pictures taken in March and in July 2011 showed neither, suggesting unusual recent developments.

David Albright, ISIS’s founder, said its finding backed up concerns at the International Atomic Energy Agency (IAEA), which has been denied access to the site since 2005, over recent “activity” there.

“Iran should immediately allow IAEA inspectors into the Parchin site and allow access to this specific building,” said Mr Albright, a former inspector. “It should also explain the purpose of the activities”

Yukiya Amano, the IAEA Director General, said earlier this year that he had “information” that “activity is ongoing” at the site, which is at the centre of the controversy over Iran’s nuclear scheme.

The IAEA believes that a large explosives containment chamber was installed at the complex in 2000 for explosives experiments that are “strong indicators of possible weapons development.”

Tehran insists its programme remains devoted to peaceful technology and that concerns to the contrary are based on “fake evidence”. Leading powers have demanded that Iran agree to abandon its production of highly-enriched uranium at talks in Iraq later this month.

Foreign minister Ali Akbar Salehi said last month his country would resolve questions on the programme “quickly and simply” but Iran has shown no willingness to allow inspectors into Parchin.

A spokesman for the State Department declined to comment. Spokesmen for the IAEA were not available for comment.