Weapons being smuggled both ways between Lebanon and Syria 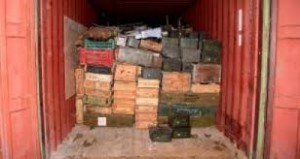 Weapons are being smuggled both ways between Lebanon and Syria, where a 14-month popular uprising has brought the country to the brink of civil war, the United Nations said on Tuesday.

Syria has repeatedly said weapons are being smuggled over its border from Lebanon and other countries to arm rebels fighting President Bashar al-Assad in the conflict. Western diplomats and U.N. officials say that although the rebels have received some weapons they remain severely outgunned.

Security forces killed at least 10 people in fighting across Syria on Tuesday, activists said, as international mediator Kofi Annan, the Red Cross and Arab League warned the country was descending into civil war.

“Based on information that we have there are reasons to believe that there is a flow of arms both ways – from Lebanon into Syria and from Syria into Lebanon,” said Terje Roed-Larsen, U.N. special envoy on the implementation of a security council resolution that calls for the disarming of Lebanese militia.

“We do not have independent observers for this, but we are basing our reporting on information we are receiving from a variety of sources,” he told reporters after briefing the 15-member U.N. Security Council.

According to Roed-Larsen’s briefing notes, he told the council U.N. Secretary-General Ban Ki-moon had raised the issue of cross-border arms transfers with Lebanese officials during a recent visit to Beirut, urging them to improve border control.

Lebanese authorities seized 60,000 rounds of ammunition hidden in two cars on an Italian container ship docked at the northern Lebanese port of Tripoli, a security source said earlier on Tuesday. Tripoli, a mainly Sunni Muslim city, has seen regular protests in support of the uprising against Assad.

In late April, Lebanese authorities seized a large consignment of Libyan weapons including rocket-propelled grenades and heavy caliber ammunition from a ship intercepted in the Mediterranean. The ship’s owner said the vessel was traveling to Tripoli in Lebanon.

The United Nations says more than 9,000 people have been killed by state forces trying to crush the revolt against four decades of rule by Assad and his father, Hafez al-Assad.

What began as a peaceful protest movement has been overtaken by an armed insurgency against Syrian forces. The government says the rebels are terrorists steered by foreign powers and over 2,600 people from the police and army have been killed.

U.N.-Arab League mediator Kofi Annan, told the Security Council earlier on Tuesday that peace in Syria remains elusive nearly a month after a truce was announced.