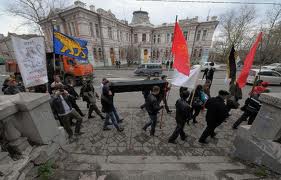 Russian demonstrators carried a black coffin bearing the word ‘democracy’ through the city of Vladivostok on Sunday at the start of protests against Vladimir Putin on the eve of his return to the presidency for another six years.

The opposition also planned a “march of the million” in Moscow and staged smaller rallies in other cities the day before a lavish inauguration ceremony inside the Kremlin at which the head of the Russian Orthodox Church will bless Putin.

Many Russians are angry that Putin, 59, is extending his already 12-year domination of Russia and fear he will stifle political and economic reform during his new term.

Witnesses said about 100 protesters staged a rally in a central square in the Pacific port of Vladivostok and unfurled a banner declaring “Putin is not our president”, a reference to allegations of fraud in the March 4 election that Putin won.

“Putin was illegitimately elected … We cannot stay silent and watch this disgrace,” Boris Nemtsov, a liberal opposition leader, said before the Moscow march got underway.

“People who are not indifferent will come to show Putin his inauguration is not a national holiday like he thinks it is, like a coronation, it is the funeral of honest politics.”

Putin has dismissed allegations that widespread fraud helped him win the presidential election and secured victory for his United Russia party in a parliamentary poll in December.

Six people were detained after the rally in Vladivostok, opposition supporters told reporters. Police also detained 10 protesters in the Urals city of Kurgan and several were led away by police in the Western Siberian city of Kemerovo, Russian media said.

Weeks of protests against Putin, sparked by allegations of electoral fraud, lost momentum when he was re-elected. But the opposition hoped to draw large crowds again on Sunday to put him under more pressure at the start of his new term.

Enthusiasm for the protests could, however, be dented by the fact that the opposition called the protests on a national holiday when many people like to leave Moscow and head for the countryside.

In response to the opposition’s plans, pro-Putin supporters have announced their own rally, saying they expect 50,000 people to gather at a park in southeast Moscow.

Users of social networking sites reported attempts by the authorities in towns outside Moscow to prevent opposition supporters coming to the capital.

They said some activists were detained by police for questioning, and that some received phone calls from police suggesting they should refrain from travelling to Moscow. The reports of intimidation could not be independently confirmed.

Outgoing President Dmitry Medvedev has pushed only limited political reforms through parliament following the protests, which at their height attracted tens of thousands of people in Moscow and St Petersburg but did not spread outside big cities.

The demonstrations have deprived Putin of his aura of invincibility and opposition candidates have been trying to get a foothold on power in municipal elections, encouraged by setbacks suffered by United Russia in recent mayoral races.

City authorities approved a march of up to 5,000 people to a square across the Moscow river from the Kremlin.

The organizers hope many more will show up but their goals are not clear to everyone now that Putin is coming back as president after four years as prime minister, a post he took because of a constitutional ban on his serving three successive terms as president.

“The time for mass demonstrations has passed in the absence of political events that can provoke mass indignation, only local issues remain,” said Alexei Mukhin, an analyst with the Moscow-based Centre for Political Information.

“I don’t expect a million, that’s for sure … Not to mention that ‘May-time barbecues’ is a magical term that makes any attempt to hold a mass demonstration unsuccessful,” he said, referring to Russians’ love of getting out into the country at this time of year.