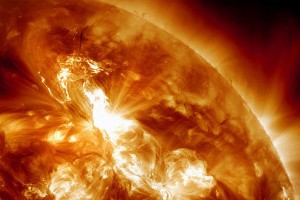 A stream of highly charged particles from the sun is headed straight toward Earth, threatening to plunge cities around the world into darkness and bring the global economy screeching to a halt.

This isn’t the premise of the latest doomsday thriller. Massive solar storms have happened before — and another one is likely to occur soon, according to Mike Hapgood, a space weather scientist at the Rutherford Appleton Laboratory near Oxford, England.

Much of the planet’s electronic equipment, as well as orbiting satellites, have been built to withstand these periodic geomagnetic storms. But the world is still not prepared for a truly damaging solar storm, Hapgood argues in a recent commentary published in the journal Nature.

Hapgood talked with The Times about the potential effects of such a storm and how the world should prepare for it.

What exactly is a solar storm?

I find that’s hard to answer. The term “solar storm” has crept into our usage, but nobody has defined what it means. Whether a “solar storm” is happening on the sun or is referring to the effect on the Earth depends on who’s talking.

I prefer “space weather,” because it focuses our attention on the phenomena in space that travel from the sun to the Earth.

People often talk about solar flares and solar storms in the same breath. What’s the difference?

Solar flares mainly emit X-rays — we also get radio waves from these things, and white light in the brightest of flares. They all travel at the same speed as light, so it takes eight minutes to arrive. There are some effects from flares, such as radio interference from the radio bursts.

But that’s a pretty small-beer thing. The big thing is the geomagnetic storms [on Earth] that affect the power grid, and that’s caused by the coronal mass ejections [from the sun].

Coronal mass ejections are caused when the magnetic field in the sun’s atmosphere gets disrupted and then the plasma, the sun’s hot ionized gas, erupts and send charged particles into space. Think of it like a hurricane — is it headed toward us or not headed toward us? If we’re lucky, it misses us.

How are solar flares and coronal mass ejections related?

There’s an association between flares and coronal mass ejections, but it’s a relationship we don’t quite understand scientifically. Sometimes the CME launches before the flare occurs, and vice versa.

What happens when those particles reach Earth?

There can be a whole range of effects. The classic one everyone quotes is the effect on the power grid. A big geomagnetic storm can essentially put extra electric currents into the grid. If it gets bad enough, you can have a complete failure of the power grid — it happened in Quebec back in 1989. If you’ve got that, then you’ve just got to get it back on again. But you could also damage the transformers, which would make it much harder to get the electric power back.

How else could people be affected?

You get big disturbances in the Earth’s upper atmosphere — what we call the ionosphere — and that could be very disruptive to things like GPS [the network of global positioning system satellites]. Given the extent we use GPS in everyday life [including for cellphone networks, shipping safety and financial transaction records], that’s a big issue.

The storms can also disrupt communications on transoceanic flights. Sometimes when that happens, they will either divert or cancel flights. So that would be the like the disruption we had in Europe from the volcano two years ago, where they had to close down airspace for safety reasons.

In the U.K., there were two damaged transformers that had to be repaired. But no power cuts. The worst thing is what happened in Quebec. In Quebec, the power system went from normal operation to failure in 90 seconds. It affected around 6 million people. The impact was reckoned to be $2 billion Canadian in 1989 prices.

We had lots of disruption to communications to spacecraft operations. The North American Aerospace Defense Command has big radars tracking everything in space, and as they describe it, they lost 1,600 space objects. They found them again, but for a few days they didn’t know where they were.

Is that the biggest geomagnetic storm on record?

We always describe the storm in 1859 as the biggest space weather event. We know there were huge impacts on the telegraph, which suggests there would be similarly severe impacts on modern power grids. It’s hard to compare it to the 1989 event because of the changes in our technology.

Many systems have been built to withstand a storm as big as the 1989 event. Is that good enough?

A serious concern would be whole regions losing electrical power for some significant time. Here in the U.K., the official assessment is that we could lose one or two regions where the power might be out for several months.

What would the consequences be?

In the modern world, we use electricity for so many things. We require electrical power to pump water into people’s houses and to pump the sewage away. [You can imagine] what could happen if the sewage systems aren’t pumping stuff away.

Could the economy function?

Most of the time you’re using credit cards, debit cards or you’ll be getting money out of an ATM. If you’ve lost the power, the computers in the bank that keep track of our money will have back-up power, but not the ATMs or the machines in the shops. So if you had a big power outage, it wouldn’t be long before we’d be trying to find cash.

What are the chances that something like this will happen soon?

A recent paper [published in February in the journal Space Weather] tried to estimate the chance of having a repeat of 1859 and came up with a value of a 12% chance of it happening in the next 10 years. That’s quite a high risk.

What can be done?

The biggest step is to make more and more people aware of the issue, so they’re thinking about it in the way they design things. That’s the most critical part.

I think it’s also getting a better picture of these very violent past events. We’d like to find out more about the scope of those events. We have a lot of old data from past events that’s on paper — in newspapers and so on — and we’re busy trying to find ways to turn it into digital.

We had a recent flare-up of publicity in March thanks to a solar storm that didn’t really amount to much. Is this sort of coverage a good thing or a bad thing?

It makes such a good scare story, and it’s entertaining. It was a mildly interesting event, certainly, but not at all big-league stuff. It makes people think, “Oh it’s nothing really,” so experts like myself are in danger of being in the crying-wolf situation. That’s something that is a concern to me, personally.