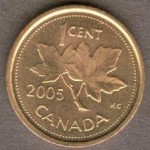 Canada minted its final penny today as Finance Minister Jim Flaherty said the coin was too expensive to produce and no longer needed for business.

“The real issue was that people weren’t using them, they were putting them in jars at home, and we were doing the same thing at my house,” Flaherty said. He spoke today at the Royal Canadian Mint in Winnipeg, Manitoba, before pushing a button that stamped the last one-cent coin.

The longest-serving finance minister in the Group of Seven nations promised in his March 29 budget to save C$11 million annually by eliminating the coin that he says costs 1.6 cents to mint. The price of copper, which is used in the penny’s production, has surged more than 330 percent since 2000.

Getting rid of the coin will have little impact on inflation, theBank of Canada said in a May 2010 report. Electronic transactions will still be priced in cents, while retailers will round cash transactions to the nearest five-cent interval, according to the budget documents. The coin will still be usable in payments.

The mint has produced 35 billion pennies since it began production in 1908. Distribution of the coin will end later this year. Pennies have been made of copper-plated zinc and copper- plated steel since 1997. The last penny will go to the country’s currency museum in Ottawa.

“I’m not going to miss the penny,” said Mike Gregoire, 37, who was touring the Mint with his son. “I find it more of a nuisance; I rarely ask for my pennies back” as change from shopkeepers, he said.

The penny, with two maple leaves on one side and a portrait of Queen Elizabeth II on the other, has lost 95 percent of its purchasing power since it was first produced by the mint.