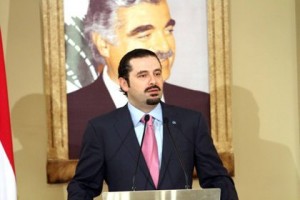 Former Lebanese PM Saad Hariri addressed via video link a rally that was held by the Mustaqbal Movement in downtown Beirut to mark Martyrs Day and May 7 events.

Several years ago, Rafik Hariri stood in this square to commemorate Martyrs Day without knowing that his own tomb would be built in this square, the former PM said adding “May 6 is the day of martyrdom and freedom.”

Commenting on May 7 , 2008 event when Hezbollah occupied the western part of Beirut and tried to occupy Mt Lebanon when the cabinet of former PM Fouad Siniora decided to remove the party’s telecommunications network Hariri said :

“May 7, [2008] was not a glorious day but a disgraceful one. It poisoned life between brothers and when certain parties pointed their guns at fellow Lebanese to accomplish political goals”

Hariri explained why the people in Beirut did not fight back

“In May 2008, people of Beirut chose peaceful resistance to prevent the ghost of the civil war from returning. Since May 2008, honorable people in Beirut and Lebanon made sacrifices…to defend Lebanon by rejecting violence and non-state ( Hezbollah) arms and by holding on to democracy to express their opinion.

– We said it loud and clear during the parliamentary elections of 2009 after the black May [7 events], and we will say it louder today that we reject [non-state] arms and violence. Our choice is a state responsible for all. Our choice is to live under the law and order of the state . Our choice is the path of justice and truth, not revenge and blood.

Hariri assured the crowds that he does not hold Hezbollah nor the Shiites responsible for his father’s assassination.

“As we said before, we do not hold any sect or category responsible for Rafik Hariri’s blood and today we tell our martyrs that we are celebrating the victory of rejection of strife between Sunnis and Shiites”

Commenting on Hezbollah insistence on an electoral law based on proportional representation and one electoral district for the whole country Hariri said:

” They want parliamentary elections that would bring back authorities of tutelage. This will not pass. We will not give those tampering with co-existence a chance to achieve their aim .”

His comment is in line with what Progressive Socialist Party leader MP Walid Jumblatt has been saying for the past few months.

Hariri commented on the upcoming elections in Syria

” Tomorrow, there is the game of elections in Syria. These [elections] are forged, par excellence. I do not know how elections will occur in Syrian cities and towns besieged by murder and destruction.

Syrian opposition leaders on Sunday dismissed upcoming parliamentary elections as a cynical attempt by President Bashar Assad to hold on to power and urged voters to stay away. The regime has portrayed Monday’s vote as a sign of its willingness to carry out reforms, while at the same time denying that it faces a popular uprising.

“Today as we choose the path of peaceful and democratic struggle to defend independence, dignity and freedom, there are brothers and sisters for us falling in Syria. They are martyrs of freedom, dignity and democracy. [They are being killed] by the killing machine of the regime of Syrian President Bashar al-Assad.”

” We know that our peaceful struggle defending Lebanon is the same struggle of the Syrian people calling for democracy and freedom.” He said