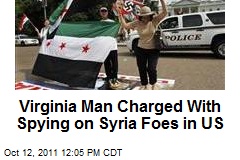 Jeddah, Saudi Arabia- Amid mixed feelings of worry, anxiety and sadness, members of the Syrian community in the Kingdom are closely following news from home about their relatives who take part in the revolution against President Bashar Assad and those who have deserted the regular army to join the Syria Free Army (SFA).

The worries of the Syrian residents for their relatives and loved ones back in Syria were further aggravated by the regime’s current escalation of violence, despite the presence of UN monitors.

A large number of the Syrian expatriates have expressed fear that spies might infiltrate their country’s embassy in Riyadh or the consulate in Jeddah to obtain information about the whereabouts of relatives who are active in the revolution against the regime.

Syrian activist Muhammad Mazied Al-Turkawi, who is a member of the Syrian National Council (SNC), regularly receives his compatriots from the city of Homs in his Jeddah residence to talk about the destruction of their city and the situation in Syria in general.

He said there are 30 members of the SNC in Saudi Arabia. “Though no more than three percent of Syrian expatriates support the regime, we fear they may infiltrate our meetings and reveal the names of our relatives who are participating in the revolution to the authorities,” he said.

Al-Turkawi also said that relatives in Syria were being very cautions not to reveal the supporters of the revolution abroad.

There are about 400,000 Syrian expatriates in Saudi Arabia. About 40 percent of those live in Jeddah where they work as doctors, engineers and for companies in the private sector.

Al-Turkawi said a large number of Syrians in the Kingdom have actually boycotted their embassy and consulate as an expression of solidarity with their repressed and tortured relatives in Syria.

Al-Haj Salah, nicknamed Abu Adnan, is a famous Syrian in the Kingdom. He is the father of two sons who are active in the revolution. One of them is Khaled Salah, spokesman of the Coordinating Authority for the Syrian Revolution in Homs, who is at the top of the list of activists wanted by the regime. His second son, Ajwad, deserted the regular army as a soldier and joined the SFA.

Abu Adnan lost his third son Ahmed during the random shelling of Baba Amro district in Homs. He himself is a citizen of this particular district.

Abu Anan does not hide his deep worry about the fate of his two sons who refused to listen to his advice and leave Syria. In stead, they insisted on staying home to be part of the revolution, which would ultimately topple Assad.

Abu Adnan is an authority when it comes to news about the city of Homs as he is regularly briefed by his two sons about what is going on there.

Many observers believed that, as an official spokesman, his son Khaled has bared the atrocities and brutalities of the regime against civilians through the video clips he sends to TV channels. He does so in spite of the complete blackout the regime imposed on the media.

The Syrian regime denied press and media employees entry into the country to cover events in Syria.

Abu Adnan said the regime closely watched his family and relatives in Syria, just because they are related to his son Khaled. “They go from one hiding place to the next to escape government militias. I am now thinking of bringing my family to the Kingdom,” he said.

Abu Adnan said Homs has become a ghost city after government forces had driven its inhabitants out. “Baba Amro district in Homs had a population of 20,000. Now only 10 families are still living there,” he said.

Abu Adnan, who hails from Al-Fawwarah tribe, one of the most famous and influential tribes in Homs, said his son Khaled had joined the revolution from its outbreak and was injured twice during the demonstrations. He said the Turkish Embassy in Damascus offered his son a Turkish passport to leave the country. He refused the offer, preferring to stay in his country and play his role in the uprising against the regime.

Abu Adnan doubted the UN monitors would be able to maintain the truce. He said 12 activists in Hammah who had talked to the monitors had been shot dead by the government forces the moment the observers left the city.

He said the manhunt for his son never stopped. The authorities had obtained information about him from his university. “My son is now besieged in Homs and helps to reveal the crimes of the regime to the monitors,” he said.