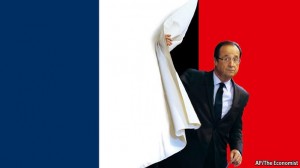 France’s presidential election has offered a glimpse of Europe in revolutionary mood. Yet it would be a mistake to draw the conclusion that the Fifth Republic is poised to elect a revolutionary president.

European democracy has a new organising assumption. Citizens may still change their leaders from time to time, but only on the clear understanding that elections do not herald a change of direction. Left or right, inside or outside the euro, ruling elites are worshipping at the altar of austerity. None dares challenge the catechism of fiscal rectitude.

The sense of futility this engenders gave the first round of France’s presidential election its revolutionary flavour. That nearly a fifth of voters backed Marine Le Pen’s National Front and more than a tenth Jean-Luc Melenchon’s (hard) Left Front spoke to the depth of national frustration. Here was a salutary reminder, if one were needed, of the way populism and xenophobia flourish during times of depression.

The French are not alone. In Hungary, Viktor Orban heads a rightwing nationalist government that has been trampling on the rule of law in an effort to establish permanent political hegemony. The populist right is on the rise in the smaller countries of northern Europe, witness the self-styled True Finns and Geert Wilders’s Freedom Party. In the Netherlands and elsewhere, euroscepticism has also become the banner of the hard left.

Yet the choice for France in today’s presidential run-off is a more familiar one, in which the rhetoric of the campaign belies the narrowness of the policy choice.

The Socialist party leader Francois Hollande is a small ‘c’ conservative who wants to reclaim Europe’s postwar social market model. President Nicolas Sarkozy’s pitch for a second term is also imbued with nostalgia. Sarkozy promises to restore France to the greatness it knew in the days of De Gaulle. The striking impression left by last week’s televised debate between the two candidates was one of deep personal animus rather than of great policy chasms.

Barring a spectacular upset, Hollande is set to win; not so much because he has stirred warmth and respect among the French people, but rather because Sarkozy has lost them.

Outside France, however, Hollande has become something of a bogeyman. Germany’s Chancellor Angela Merkel scarcely views Sarkozy as a soul mate, but she has been heard to say that she fears it will be a ‘nightmare’ doing business with Hollande. Britain’s Prime Minister David Cameron made a point of snubbing the Socialist leader when he paid a visit to London a few weeks ago.

In Washington, conventional wisdom seems to have it that any European who calls himself a socialist must be a closet communist. Never mind that Hollande wants to balance the French budget by 2016 — a commitment to fiscal rectitude the Republican presidential candidate Mitt Romney would struggle to make for the US.

The Economist has declared on its front cover that Hollande is ‘dangerous’ — though, being British, it did add a qualifying ‘rather’ to this disobliging epithet. The would-be president, the magazine observed, “genuinely [my italics] believes in the need to create a fairer society”. Well, what could be more dangerous than that?

Such alarmism rests on some curious premises: that the lesson of the recent past is that governments should never meddle with the markets; and that Europe’s present economic strategy has been a roaring success in rebuilding public finances and restoring economic growth. I had thought the most ardent disciples of liberal markets had been alerted by the global crash to the dangers of unfettered financial capitalism. As for one-size-fits-all austerity, even some German policy makers are beginning to wonder whether there is not more to economics than spending cuts and tax increases.

In any event, a President Hollande would face tight constraints. The bond markets will severely temper any desire to make a dash for growth. A more important brake will be applied by France’s self-perception. Europe’s indebted southern states may see a socialist France as a powerful ally. Hollande, however, shares with his predecessors in the Elysee a profoundly different view of the continent’s political geography.

This sees France holding on to its claim to European leadership — and above all to the pretence of parity with Berlin in shaping the future of the continent. As Francois Mitterrand well understood when he adopted the franc fort policy 30 years ago, such pretensions carry a price tag. When push comes to shove, Germany makes the economic rules.

Hollande has one or two crackpot ideas. Taxing the rich at 75 per cent may salve leftwing consciences but it will not do any economic good. Increasing the share of public spending from its present 56 per cent is risky to say the least. Economic growth is not a leftwing idea — ask Mario Monti, Italy’s technocrat prime minister. Monti’s economic liberalisation and deficit-cutting plans depend above all else on finding a path out of stagnation. The really ‘dangerous’ notion in today’s Europe is not the call for a debate about growth but the assumption that things can simply go on as they are. There has to be a bridge between recession and deficit reduction. Without it, the continent will indeed risk a revolution, even if not yet in France.