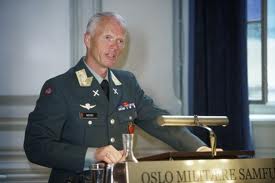 The head of the U.N. military observer mission in Syria, Major General Robert Mood, said on Thursday that it was the responsibility of the Syrian army to make the first move to halt the violence, while the White House said the international community must “admit defeat” if a U.N.-backed peace plan fails.

“My approach to that is that the strongest part needs to make the first move,” he told reporters, according to Reuters.

“I was referring to the Syrian government and the Syrian army. They have the strength, they have the position and they also have the potential generosity to make the first step in a good direction,” he said, when pressed on whether he was speaking about the regime forces.

Meanwhile, amid the continuing violence in the crisis-torn country, the White House accused Syrian President Bashar al-Assad of making “no effort” to implement a U.N.-backed peace plan so far.

“If the regime’s intransigence continues, the international community is going to have to admit defeat and work to address the serious threat to peace and stability being perpetrated by the Assad regime,” White House spokesman Jay Carney said.

“Political transition is urgently needed in Syria. It is certainly our hope that the Annan plan succeeds,” he said, referring to the plan crafted by former U.N. chief Kofi Annan. “We remain, based on the evidence, highly skeptical of Assad’s willingness to meet the conditions of that plan, because he has so clearly failed to meet them thus far.”

The United Nations has accused both sides to the conflict of failing to abide by the terms of the ceasefire which it has admitted was not holding.

The plan, brokered by U.N.-Arab League envoy Kofi Annan, calls for a halt to fighting, the withdrawal of heavy weapons from urban areas, a daily humanitarian ceasefire, media access, an inclusive political process, and the right to demonstrate as well as the release of detainees.

Some 300 unarmed U.N. observers are to oversee the truce. An advance team began arriving in the country last month and their number has slowly increased and is supposed to reach the full complement in coming weeks.

Although the level of violence has gone down since the truce went into effect, there are still daily clashes and casualties reported.

The Observatory said more than 600 people have died since the truce went into effect, the majority of them civilians.

Overall, more than 11,000 people have died since the uprising broke out in March last year, according to the Observatory’s figures.

Syrian troops killed four students in a campus raid on Thursday that human rights monitors said could mark a turning point for the second-largest city Aleppo in the more than 13-month uprising.

The four students died and 28 more were wounded, three of them critically, when government forces and armed supporters stormed the dormitories at Aleppo University following a campus demonstration, a monitoring group said.

The Syrian Observatory for Human Rights said some 200 students were also arrested during the pre-dawn raid.

Following the violence, the university, the country’s second-largest, announced it was suspending classes until final exams on May 13.

Rami Abdel Rahman, head of the Britain-based Observatory, said the events could mark a turning point for Syria’s second city and commercial powerhouse, which has remained relatively calm since the uprising against Assad’s regime broke out in March last year.

Students described scenes of panic as regime troops entered the dormitories, with some pupils jumping from windows to avoid arrest.

“Security forces raided the dormitories and threw out students and their belongings,” Mohammed al-Halabi, an activist on the ground, told AFP via Skype, adding some of the rooms were torched.

A number of demonstrations broke out at universities around the country in solidarity with Aleppo’s students, including at Deir Ezzor, in the northeast, in the capital Damascus, and in Daraa to its south, activists said.

The exiled opposition Syrian National Council called for a nationwide campus strike in solidarity with the Aleppo students.

Elsewhere, six civilians, including a woman and child, were killed by gunfire that targeted a bus near the town of Saraqeb in Idlib province in the northwest, the Observatory said.

Two other civilians as well as an army defector and a soldier were also killed, AFP reported.