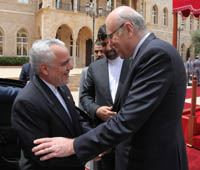 During his stay here, the Iranian official is also expected to meet Lebanese leaders on several issues of

mutual interest, according to local media.

He has already met with Prime Minister Nagib Mikati at the Grand Serail.

His visit coincided with that of U.S. Assistant Secretary of State for Near Eastern Affairs Jeffrey Feltman and US Senator Joe Lieberman who arrived in Beirut on Tuesday evening on an official visit to Lebanon.

The current Lebanese cabinet is dominated by the Iranian and Syrian backed Hezbollah militant group.