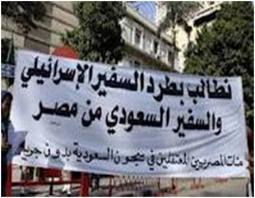 Egyptians are angry, say Arab commentators, and it’s not just because of unemployment, deteriorating security or the continued de-facto rule of the military.

Their ire is also very much connected to foreign policy, and specifically to the ties with two countries that have loomed so large in Egypt’s modern history: Israel and Saudi Arabia.

Both states took a beating in the Egyptian media this past week: Israel, over a controversial gas deal with Egypt that has been suspended, and Saudi Arabia over its arrest of a prominent Egyptian human-rights campaigner who was performing a religious pilgrimage.

In each case, Egyptian generals and their unelected allies in government have been forced to try to tame the conflicts, which are being fueled by a wide popular movement — strongly backed by elected political parties including the Muslim Brotherhood — to reassert Egypt’s dignity and prestige in the region.

The annulment of the contract leads to “the achievement of a definite popular wish to stop the exportation of gas to the Zionist entity,” wrote the columnist Wagdi Zeineddin in Al-Wafd, the Cairo-based newspaper of the liberal Al-Wafd party.

The deal to deliver Egyptian natural gas to the Israel Electric Corp. was signed in 2008 under ousted President Hosni Mubarak and accounts for 40 percent of Israel’s annual natural-gas usage.

It has long been condemned by Arab columnists because the sale price that the Mubarak government agreed to – allegedly thanks to huge bribes to the Egyptian-led gas consortium and government officials – is said to be well below market price.

Since last February, the pipeline that supplies gas to Israel, as well as to some Arab states such as Jordan, has been blown up more than a dozen times.

“We hope the decision will not be recanted and that the Egyptians’ joy will not be wasted or caused to go in vain,” said Zeineddin, who warned the Supreme Council of the Armed Forces against restarting gas shipments to Israel even at market price.

“Mubarak’s era was characterized by a submission to Israeli dictations, the implementation of Israel’s wishes and a subjugation to American pressures which prevented Egypt from constituting a source of defiance to Israel,” wrote the columnist Abdul Ghafar Shukr in the Al-Ahram daily, which generally supports the military council.

…any action which could be considered by Israel as harmful to it, whether at the level of direct Egyptian-Israeli relations or at the level of the Gaza Strip where Mubarak’s consecutive governments participated in the imposition of the blockade and the implementation of Israel’s conditions to enter it or exit it from the Egyptian side.

The annulment of the gas deal has revived “the spirit of Egypt’s position towards its historical enemy,” he concluded, “and we will not allow the killing of this spirit ever again.”

Equally delighted by the Egyptian decision, the Jerusalem-based Al-Quds wrote in an editorial that it signals changes that go well “beyond gas.”

“The issue has another aspect, deeply related to politics in light of the radical change taking place in Egypt since the fall of Mubarak and his regime,” it wrote.

Even though the armed forces council is keen to “calm its foreign fronts until the situation is stabilized at home,” sooner or later “change will come, and Egyptian-Israeli relations will no longer be as calm they used to be in the days of Mubarak.”

This could have positive consequences for the Palestinian struggle, the paper said, as Israel will want to end its occupation of Palestinian lands sooner to avoid provoking the wrath of the growing “revolutionary forces and Islamic trends” in surrounding states.

Although Israel has long been the target of Arab columnists, Saudi Arabia never faced large, sustained public criticism in Egypt during the Mubarak era.

This past week, however, there were raucous protests outside the Saudi Embassy in Cairo – it was

eventually closed and the ambassador was withdrawn – which was accompanied by a graffiti and social-media campaign disparaging the Saudi king directly. Pundits chimed in to say they are fed up with how the Saudis treat Egyptian workers and how they treat Egyptians in Egypt.

The cause of the indignation was the arrest of the Egyptian lawyer Ahmed el-Gizawi upon his arrival in Saudi Arabia on April 17. The Saudi authorities eventually claimed Gizawi had been found with more than 20,000 Xanax pills hidden in his luggage, a grave offense.

The cause of the indignation was the arrest of the Egyptian lawyer Ahmed el-Gizawi upon his arrival in Saudi Arabia on April 17. The Saudi authorities eventually claimed Gizawi had been found with more than 20,000 Xanax pills hidden in his luggage, a grave offense.

Joseph Mayton, editor-in-chief of Egypt’s Bikyamasr.com, suggested that the real reason for his arrest was that Gizawi had recently filed cases against the Saudi government “over its refusal to take action to end the horrific conditions of Egyptian workers.”

The treatment of Egyptians in Saudi Arabia, he wrote in an opinion piece for the Beirut-based Al-Akhbar daily, has angered human-rights workers, labor activists and social commentators in Egypt for several years.

Mayton said any “reasonable observer” can see the holes in the Saudi case. “The weight of a bag carrying that much medicine would be enormous. Activists even calculated the expected weight of 20,000

to be much higher than the allotted weight permitted on a flight!”

Recounting the flood of social-media invective against the Saudis, he cautioned:

While the anger is understandable, attacking Saudi citizens for the ills of their government is counterproductive. Activists should focus their outrage toward the government and the powers that have arrested Gizawi and permitted the abuse of Egyptian workers to continue. This would allow for allies among the Saudi people to emerge that could assist in releasing Gizawi and help to reduce, and ultimately end, the dangers associated with working in the kingdom.

…the Egyptian psyche has changed. Online, Egyptians are fighting against corruption across borders, attempting to hold their own government responsible for the well being of their citizens abroad, and more importantly, taking ownership over matters they perceive as infringing on Egyptian dignity. And it is no longer a one-off expression of frustration, but a concerted effort for change.

The era when “Arab despots entertained one another, oblivious to the masses, is over, at least in Egypt,” he said.

Still, unlike the widespread support for canceling the gas deal with Israel, the deteriorating relations with Saudi Arabia brought calls for caution among some politicians and commentators.

The Salafist An-Nour party, which subscribes to the Saudi brand of ultraconservative Islam, announced it would hold “love and appreciation” counter-demonstrations in support of the kingdom. That probably was met with relief by government officials desperate to ensure the imminent delivery of more than $1 billion in Saudi aid.

The columnist Samir Rajab, writing in the pro-military council Al-Jumhuriyah, was among those who chastised demonstrators.

“It is not acceptable that the demonstrators protesting outside the Saudi embassy in Cairo raise slogans carrying statements that insult the ruling system there or the king himself,” he wrote. Still, he directed some gentle criticism at the Saudi authorities over Gizawi’s arrest for an offense “which did not happen.”

Abdel-Beri Atwan, the editor in chief of Al-Quds al-Arabi, wrote that the dispute over Gizawi, in addition to serving notice to other states that Egyptians can no longer be trampled, sends “a message of warning to all the other Arab authorities that are humiliating Arab citizens because their governments are weak and corrupt and do not defend these citizens the way they should.”

That puts the Saudis in a bind, he said: “Gizawi’s release after all this commotion would be a problem and his arrest and lashing would be a greater problem. Had there been a just judiciary in Saudi Arabia, the picture would have been completely different.”

The Egyptians’ call for justice and dignity both at home and abroad contradicts the theories of Western columnists such as Thomas Friedman of the New York Times, who just this weekend explained that the Arab revolts are the first popular movements in more than a century “not animated by foreign policy or anti-colonialism or Israel or Britain.”

Try to telling that to Arabs on Twitter… or, for that matter, to Egyptians protesting outside the Saudi Embassy.

Photo: Egyptian demonstrators are holding a banned that calls for “expelling the Israeli and Saudi Arabian envoys and demand for the release of all Egyptian detainees in Saudi Arabia