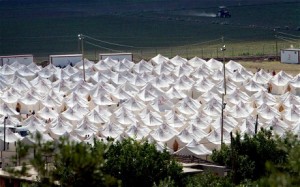 al Assad have been shelling a Syrian Refugee camps in Turkey.”

Turkey has not commented on the alleged cross border shelling, but a similar incident on April 9 prompted Ankara to threaten to use force to set up a safe haven for refugees within Syrian territory.

Four Syrian refugees and two Turks, a policeman and a translator, were wounded in the Kilis refugee camp in southeastern Turkey when they were hit by gunfire from across the border.

When asked on April 12 what Turkey’s response would be to conflict spilling over the Syrian-Turkish border, Turkish Prime Minister Recep Tayyip Erdogan responded by saying that “we have several options.”

NATO action, however, requires unanimous support from members of the North Atlantic Council, the decision-making body of the group.

Foreign Minister Ahmed Davutoglu too said Turkey was considering “all possibilities in order to protect national security” if the violence continues to bring tens of thousands of Syrian refugees into its territory.

In addition to taking in more refugees, Turkey has also emerged as the main haven for Syrian opposition groups and rebel fighters, but it refuses to arm the forces fighting the Assad regime.

The escalation at the border with Turkey followed a series of bombing across Syria that left more than 30 people dead.

U.N. chief Ban Ki-moon condemned the “terrorist bomb attacks” in the Syrian cities of Damascus and Idlib, and noted that while there had been security improvements in areas monitored by U.N. observers, he was “gravely concerned” by the continued violence.

“The Secretary-General condemns the terrorist bomb attacks in the cities of Idlib and Damascus which took place today and on 27 April 2012, killing and injuring scores of people,” Ban’s press office said in a statement

“While noting improvements in areas where U.N. monitors are deployed, the Secretary-General remains gravely concerned by reports of continued violence, killing and abuses in Syria in recent days,” it said.