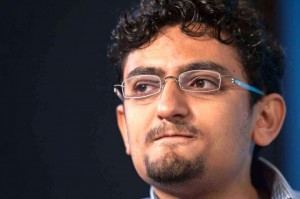 Political activist Wael Ghonim has announced his support for presidential hopeful Abdel Moneim Abouel Fotouh, saying he would be “a president for all Egyptians who will gather people, not divide them.”

On his Facebook account, Ghonim said the presidential election would be a good chance to create unity among Egyptians and unify their efforts toward progress, if a good choice for president is made.

The former Google executive administered a Facebook page called “We Are All Khaled Saeed” that helped spark the uprising against Hosni Mubarak’s regime last year.

Ghonim said that from the beginning of campaigning for the upcoming race, Abouel Fotouh was able to enhance the value of surpassing conflicts and looking for consensus, and stood apart the ideological battles that Ghonim said are far from people’s pains and hopes.

Ghonim said the value of compatibility is a reason for Egyptians of different political affiliations to announce support for him at time when they need to unite to achieve their ambitions.