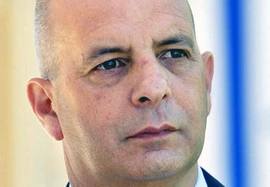 Israel’s former security chief is slamming the country’s prime minister and defense minister for their handling of Iran, saying neither one inspires confidence.

“I don’t trust a leadership that relies on messianic leadership,” said Yuval Diskin, the former head of the Shin Bet, the country’s internal security service, at a public conference Friday night in Israel.

“Our two messiahs from Caesaria and from the Akiorv Towers are not fit to stand at the helm of the government,” Diskin said, referring to the respective residences of Prime Minister Benjamin Netanyahu and Defense Minister Ehud Barak.

His comments were widely reported in the Israeli media Saturday.

Barak said while he welcomed Diskin’s entry into politics, the comments are irresponsible.

“It is both embarrassing and saddening to see the weakening of judgment and responsibility and the low language a man who served the public for years was dragged into,” said a statement from Barak’s office.

“Diskin is acting in a petty, irresponsible manner motivated by personal frustration. He is harming the heritage of generations of Shin Bet heads and the operational norms of the organization.”

A senior Israeli government official said that the comments lacked credibility because the domestic security focus of the Shin Bet made the organization a “peripheral player” when it comes to Iran.

The same official, who declined to be named publicly due to the sensitivity of the issue, said Diskin’s comments were “both surprising and strange” because he had worked under both Netanyahu and Barak, and sought to become Mossad director under their leadership.

“Are you saying these things because you didn’t get the position?” the official asked rhetorically, adding that Diskin’s attack seemed more “personal than policy.”

Diskin, a widely respected former security official, also took the two Israeli leaders to task for mis-characterizing the possible effectiveness of a military strike against Iran and its nuclear program.

He said the Israeli government presented “a false view to the public on the Iranian bomb, as though acting against Iran would prevent a nuclear bomb. But attacking Iran will encourage them to develop a bomb all the faster.”

It is not the first time a high-profile figure has criticized the Israeli government’s handling of Iran.

Meir Dagan, the former chief of Israel’s spy agency, the Mossad, has been a frequent and vocal critic of talk about an Israel strike on Iran, famously calling it a “stupid idea.”

Israeli vice-premier and Likud party member Silvan Shalom told the Jerusalem Post that Diskin should not have spoken in public.

“I think that Diskin was wrong to say what he did, and that when he considers what he said he will realize that he was wrong,” Shalom said.

Diskin’s blunt commentary follows controversial remarks by Israel’s top general, who said Iran is led by “very rational people” and doesn’t appear poised to build a nuclear bomb that would threaten his nation.

Iran “is going step by step to the place where it will be able to decide whether to manufacture a nuclear bomb,” Chief of Staff Lt. Gen. Benny Gantz told Israel’s Haaretz newspaper in Wednesday editions. “It hasn’t yet decided whether to go the extra mile.”

Those comments were in stark contrast to those of Netanyahu, who suggested to CNN that time is running out for Western sanctions on Iran to have a meaningful effect on Tehran’s nuclear program.

The sanctions “are certainly taking a bite out of the Iranian economy,” Netanyahu said in an interview broadcast Tuesday on CNN’s “Erin Burnett OutFront.” But, he said, “They haven’t rolled back the Iranian program — or even stopped it — by one iota.”