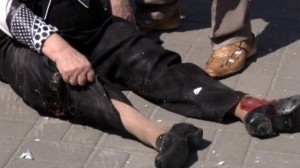 At least 27 people were wounded on Friday in a series of explosions in Ukraine, posing a major security challenge in the run-up to the Euro-2012 football tournament.

Four blasts rocked central Dnipropetrovsk around noon, emergency officials said as police combed thecity for more explosives. Four people were in serious condition and nine children were among the wounded.

“We know that there are victims, we understand that this is another challenge for the entire nation,” he said while visiting a factory in Crimea on the Black Sea.

He vowed to punish the perpetrators and anyone plotting “crimes directed at destabilising the situation in Dnipropetrovsk,” though security officials said Friday evening no arrests had been made.

Ukrainian prosecutors launched a probe into possible terrorism, with top officials including Interior Minister Vitaly Zakharchenko quickly leaving for Dnipropetrovsk on the Dnieper River to oversee the investigation.

No information was released as to the possible perpetrators. A similar series of explosions in eastern Ukraine in January 2011 was linked by officials to an attempt to extort money.

Though Dnipropetrovsk is not a host city in the country’s first major international sports event, it lies on the route of a tour the trophy will be taken on, due in the city on one million May 21.

Dnipropetrovsk is also the home town of Yanukovych’s fiercest foe, the 2004 Orange Revolution leader Yulia Tymoshenko, who is serving a disputed jail sentence that has strained Ukraine’s ties with the European Union.

“I heard a very loud explosion,” said one witness, a middle-aged woman, who ran after the tram as its doors closed. “Then the tram reopened the doors, and people were jumping out in a panic,” she said.

The blast shattered windows in the tram, sending glass shards flying as far as 20 metres (65 feet).

Doctors tended to the injured, including a woman in her 50s with leg wounds who was loaded into an emergency van.

Three more blasts followed over the next hour, all in the same busy part of the city not far from the train station and the river. The last explosion was heard at 1:00 pm (1000 GMT).

A total of 25 people were hospitalised, officials said.

The cellular phone network went down for several hours as ambulances and police in bulletproof vests patrolled the streets, but residents appeared not to be panicking.

Europe’s football governing body UEFA said it was confident Ukraine could ensure security despite the attacks, though Donald Tusk, prime minister of co-host Poland, said: “This issue needs to be treated with the utmost seriousness.”

The EU’s foreign policy chief Catherine Ashton said the European Union was in close contact with Ukraine and ready to provide assistance.

Authorities denied local media reports that a group had claimed the blasts.

“No demands or threats from identified or non-identified people have been sent to the police,” Interfax quoted Ukraine’s deputy security service chief Vladimir Rakitsky as telling a special session of parliament.

The head of the Football Federation of Ukraine Grigory Surkis said the blasts aimed at undermining Ukraine’s ability to host the tournament.

“There are enough reasons that the aim is to torpedo the tournament in Ukraine at all costs and compromise our country in the eyes of the international community,” he said in a statement to AFP.

The blasts coincided with security services conducting anti-terrorist drills at the Olympic stadium in the capital Kiev, a venue for several matches in the Euro-2012, including the final on July 1.

Baird also said an investigation must be “fair and free of political interference” and encouraged Kiev “not to use this unfortunate situation as a pretext to curtail basic freedoms like freedom of expression” in the country.

One million Canadians are of Ukrainian descent and Canada was the first Western nation in 1991 to recognize Ukraine’s independence.