Ship with arms to Syria rebels seized by Lebanon navy 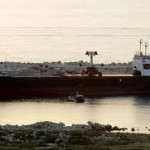 The ship was forced to dock at Selaata port, 50 kilometers north of Beirut, where its cargo is being inspected, the sources said

The ship was identified as “Lutfallah II” , was flying the Egyptian flag and reportedly was headed to one of Syria’s ports. Members of the crew were arrested by the Lebanese navy. Three large container trucks were seen entering the port.

The current Lebanese cabinet is dominated by Hezbollah which has been supporting the Syrian regime in its crackdown against the pro democracy protesters. The Free Syrian Army , also known as rebels was established last July to protect the peaceful demonstrators. Over 11100 Syrians have been killed since the uprising began about 13 months ago