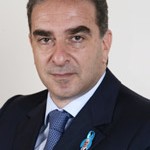 March 14 MP Michel Pharaon said on Friday that the bombs that were discovered in Achrafieh on Thursday were linked to the assassination attempt that targeted Lebanese Forces leader Samir Geagea.

“ The discovery of the bombs is linked to the campaign of terror and threats and to the assassination attempt against Geagea,” Pharaon was quoted as saying following a meeting with Geagea.

The MP voiced hope that the details of the incident would be uncovered adding that Beirut’s Achrafieh “has always been the first to be targeted.”

On April 4 the Lebanese Forces leader miraculously miraculously survived an assassination attempt when he was shot at by “snipers” as he was walking with bodyguards outside his residence in Maarab. The bullets reportedly left holes in the wall of his house.

“The responsibilities of the government and March 8 are limited to protecting the hegemony of [Hezbollah’s] weapons, while March 14’s [political] project revolves around the state and protecting the constitution and the laws.” He said

The current Lebanese cabinet which is headed by Prime Minister Najib Mikati is dominated by Hezbollah and its.