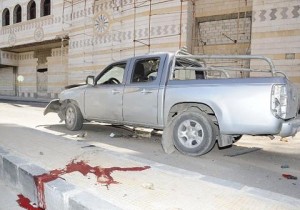 Activists say a Syrian intelligence officer has been shot and killed in the capital, Damascus, while a separate bomb blast wounded three people in the city.

The attacks come amid fears that Syria’s 13-month conflict is growing increasingly militarized, and diplomatic efforts to solidify a tenuous cease-fire continue.

The Britain-based  Syrian Observatory for Human Rights  said the officer was killed early Tuesday in the Barzeh neighborhood but gave no further information. The Syrian government did not comment.

Rebels seeking to topple President Bashar al-Assad have increased attacks on military targets and security officers, some of whom have been killed in their cars on the way to work.

In the second incident, a pro-government television channel blamed “armed terrorists” when an army truck exploded in Damascus’s central Marjeh district. The truck’s driver and two passengers in a nearby car were injured and hospitalized.

The attacks took place as a United Nations team observing Syria’s violence-ridden truce visited the restive Damascus suburb of Douma. Activists and amateur videos reported shelling and gunfire in the area, a day after 55 people were killed across Syria – mostly in Hama, a city the monitors had visited the day before.

Later Tuesday, international envoy Kofi Annan will brief the U.N. Security Council on his mediation efforts and the deployment of a 300-strong observer force in Syria just authorized by the council on Saturday.

In Geneva, the U.N. World Food Program said it aims to deliver food assistance to 500,000 people in Syria “in the coming weeks” – a tenfold increase since December.

The WFP said it is expanding its assistance at the request of the Syrian Arab Red Crescent and stands ready to increase its operations in the country further “when access permits.”

U.N. aid agencies have been largely shut out of Syria but a joint assessment carried out last month with Syrian authorities estimated that at least one million people needed humanitarian aid.

Marzouki told the pan-Arab Al-Hayat newspaper Tuesday that Assad’s international allies, “the Russians, Chinese and Iranians, must understand this man is finished and…persuade him to leave power.” 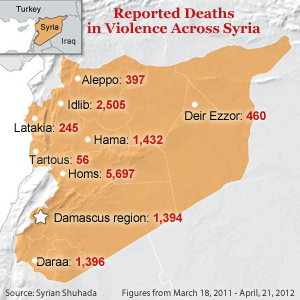 Addressing the Syrian leader directly, he said “it is better for you and your family to leave alive, because if you decide to leave dead, that means that you have caused the deaths of tens of thousands of innocents.”

On Monday, Syrian security forces killed more than 30 people in the opposition hub of Hama. A small advance team of U.N. observers had visited the central city on Sunday.

A U.N. observer spokesman said three more members joined the team Monday, raising its number to 11. Several U.N. observers also made a brief visit to the town of Zabadani, near Damascus.

The United Nations estimates that more than 9,000 people have been killed in Syria’s 13-month crackdown on the uprising, while activist groups put the death toll at more than 11,000.