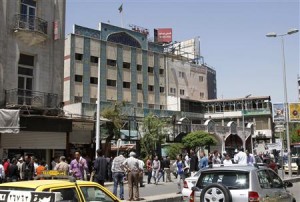 A car bomb exploded in a central Damascus neighborhood Tuesday, possibly killing the driver, while explosions were also reported elsewhere in Syria.

State media said the driver of the explosives-rigged car was injured and blamed terrorist groups for the bombing in Al-Marjeh, near an Iranian cultural center.

An anti-government activist witness said the vehicle was a military Jeep and the driver appeared to be dead. He added that the pro-government Addounia TV station arrived on the scene minutes after the explosion, a common accusation leveled by of opposition groups who say it indicates government foreknowledge of such bombings.

State media also reported that two army officers were killed Monday night in a Damascus suburb when an armed group opened fire on them.

Explosions rocked other parts of Syria on Tuesday as the country increasingly slips back into fierce violence despite the presence of United Nations observers sent to monitor a cease-fire that does not appear to be holding.

The group also reported explosions in the city of Hama, which saw its worst violence in months Monday when government forces shelled several neighborhoods and fired on protesters, as well as in two towns in Daraa province and in a Damascus suburb.

Photo: People gather at the scene of a car bomb explosion near the Iranian Cultural Center (back) in Damascus April 24, 2012. The car bomb wounded at least three people in the central Damascus district of Merjeh on Tuesday, a pro-government Syrian television channel said, blaming “armed terrorists”. REUTERS/Khaled al-Hariri