How many walls will secure the Zionist regime in Palestine?

by yalibnan
706
No regime in history has built, in the span of six decades, the number of walls the paranoid regime in Tel Aviv has erected and it plans at least five more.
Share: 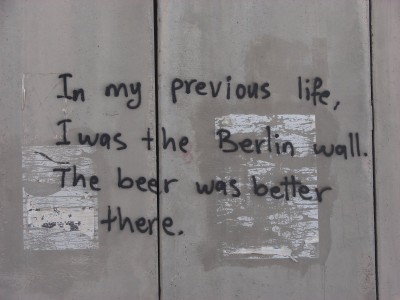 BEIRUT — It may be that researchers would want to examine as long ago as the period from the 3rd century BC until the beginning of the 17th century in order to find a regime so frenetically building walls and barriers in a hopeless quest to hold onto stolen lands, as we in Lebanon may soon witness in the south of the country.

It was back in 221 BC that in order to protect China from the land claims of the Xiongnu people from Mongolia—the Xiongnu tribe being China’s main enemy at that time who sought the return of lands they claimed the Chinese had stolen—that the emperor Qin Shi Huang ordered the construction of a wall to guard China’s territorial gains.

Lots of walls have been built throughout history to preserve occupied lands. The Romans built Hadrian’s Wall in England to keep the Picts out and the East Germans built the Berlin wall to keep the people in. But no regime in history has built, in the span of six decades, the number of walls the paranoid regime in Tel Aviv has erected. And it plans at least five more “anti-terrorist protective walls”, including one slated to begin soon along the Lebanese-Palestine border at the Lebanese village of Kfar Kila. And that one may present a problem.

The decision to build a wall “to replace the existing Israeli technical fence” along the Blue Line near the town of Kfar Kila was announced last month by Tel Aviv. The announcement followed a meeting between the Israel military and UNIFIL, and both are keeping fairly mum about what it knows about this latest wall, but UNIFIL spokesman Neeraj Singh hinted to this observer that the first section will be about half a mile long and approximately 16 feet high.

Some south Lebanon residents are strongly objecting ,among other reasons, that the high wall will block the scenic views into Palestine. Others are ridiculing the reasons for the wall expressed by the US-Israeli lobby that will ask the American taxpayer to pay for it.

Israel firster, David Schenker, from the Washington Institute for Near East Policy, set up by AIPAC, told a Congressional hearing recently: “South Lebanon is obviously a very sensitive area [for Israel], being so close to Metula and the possibility of infiltration by Hezbollah and Palestinians is a legitimate concern. The Israeli government believes that a this wall will prevent terrorists from launching direct line-of-sight firing of things like RPGs and mortars. Even the throwing of stones which some tourists visiting the area are in the habit of doing.”

Local observers, UNIFIL officials and experts like Timor Goksel, who worked as UNIFIL’s spokesman for 24 years along the blue line, expressed surprise at why Israel is claiming that Kfar Kila is a particularly dangerous area that needs a wall.

In point of fact the area has not been a particularly hazardous or “sensitive” one historically, even when the PLO controlled the area in the 1970’s. Goksel explained; “In my 24 years’ experience, there were never any attacks there because it’s adjacent to a Lebanese village, so any attack there will make life for the Lebanese difficult. I don’t think anybody has ever thought of doing anything there. Moreover, even if you cross into Israel at Kifa Kula there, you’re not going to come across an Israeli position for a long time, so it doesn’t make sense for anyone to attack from there. What are you going to attack? There’s no target.”

Some local observers are speculating that the real reason Israel wants the barrier in Kfar Kila might be to stop its troops from bargaining for drugs in exchange for weapons and classified military information, as the IDF’s drug problem among its “northern command” soldiers has escalated since the battering it took in the July 2006 war.

Israel’s newest frontier wall will follow the one being erected along the 150-mile boundary between the Sinai and Negev deserts. That wall building project is due to be completed by the end of this year of 2012. Once the Kfar Kila wall is finished, Israel will be almost completely enclosed by steel, barbed wire and concrete, leaving only the southern border with Jordan between the Dead and Red Seas without a physical barrier. But that too, may be walled in the future according to Shenker. He testified that the reason was due to the uncertainty in Jordan and its increasingly wobbly government.

Yet another wall, approximately seven miles from the Mediterranean along the southern border will meet the fence Israel has already been built around Gaza. This wall runs for 32 miles, with a buffer zone, which Palestinians are forbidden from entering, and extends close to 1,000 meters inside the narrow Gaza Strip, walling off more prime Palestinian agricultural land. This “security war” has caged Palestinians inside Gaza but did not prevent the cross-border capture of IDF soldier Gilad Shalit in 2006.

Along the Palestine-Lebanon border, a barrier built by Israel in the 1970s along the boundary was reconstructed, after Israel was forced out of Lebanon in 2000 following a 22-year occupation. This barrier did not prevent Hezbollah in a cross-border ambush in 2006, capturing two Israeli soldiers in order to negotiate a prisoner exchange. Nor did it prevent Hezbollah from firing of thousands of rockets during the ensuing 33-day war in retaliation for Israeli bombing much of south Lebanon.

And the “protective walls” rise like mushroom after a summer rain.

Further east from Lebanon, an Israeli barrier has been constructed on the ceasefire line drawn at the end of the 1973 Yom Kippur war, running between the Golan Heights, which Israel has illegally occupied for nearly 45 years, and Syria. It was here that hundreds of pro-Palestinian demonstrators entered occupied Palestine last May, in the Golan and along the Lebanese border. More than a dozen people were killed and scores injured when Zionist forces opened fire on the unarmed civilians.

A crossing at Quneitra, now operated by the UN, does allow some movement of UN personnel, truckloads of apples, a few Druze students and the occasional Syrian bride in white.

A few miles north of Quneitra is Shouting Hill, where Druze families in the Golan yell greetings across the barrier to relatives in Syria.

Moving south through heavily mined fields and hills, the 1973 ceasefire line is bordered by Israeli military bases and closed military zones, and shells of tanks from past battles, until it connects with the border with Jordan. It then joins with one of Israel’s first walls, constructed in the late 1960s, which now stretches almost from the Sea of Galilee down the Jordan Valley to the Dead Sea. Most of this line is not Israel’s border, but rather a barrier separating Jordan from the Israeli-occupied West Bank.

Around a third of the way down this stretch, the barrier joins the infamous huge steel-and-concrete West Bank wall. This runs along or inside the 1949 armistice line, swallowing up tracts of Palestinian agricultural land, slicing through communities and separating farmers from their fields and olive trees. As with its other 18 walls and barriers, the Zionist regime claims it is simply a security measure, but many believe it marks the boundaries of a future Palestinian state, consuming an additional 12 percent of the West Bank. Approximately two-thirds of its 465-mile length is complete, mostly as a steel fence with wide exclusion zones on either side. According to the current route, 8.5 per cent of the West Bank territory and 27,520 Palestinians are on the “Israeli” side of the barrier. Another 3.4 percent of the area (with 247,800 inhabitants) is completely or partially surrounded by the barrier.

Two similar barriers, the Israeli Gaza Strip barrier and the Israeli-built 7-9 meter (23 – 30 ft) wall separating Gaza from Egypt (temporarily breached on January 23, 2008), which is currently under Egyptian control, are also widely condemned by the international community.

Returning to the subject of the latest wall project, increasingly the Zionist regime opposes discussions, hearings, visits, expressions of solidarity with Palestinians, and even the viewing its garrison state from south Lebanon. Cutting off a view that people throughout history have marveled at represents a continuation of its isolation and xenophobia.

Following the joint meeting at Kkar Kila noted above, UNIFIL Major-General Serra said: “The meeting was called to assist Israel in putting in place additional security measures along the Blue Line in the Kafr Kila area in order to minimize the scope for sporadic tensions or any misunderstandings that could lead to escalation of the situation.”

In fact, the opposite with likely happen. In a recent visit to Ahmad Jibril’s Palestinian camp in the Bekaa Valley, and in discussion with salafist groups in Saida, it’s plain the wall will likely become an object of target practice and strain further UNIFIL and Hezbollah efforts to keep the border calm.

In a scathing commentary in Yedioth Ahronoth, Israel’s biggest-selling newspaper, defense analyst Alex Fishman recently wrote: “We have become a nation that imprisons itself behind fences, which huddles terrified behind defensive shields.” It has become, he said, a “national mental illness”.