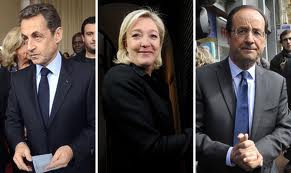 French President Nicolas Sarkozy courted far-right voters Monday in advance of a May 6 runoff against Socialist Francois Hollande, who won the most support in the first round of France’s presidential elections.

Sarkozy said he has a “duty to listen” to far-right voters after National Front candidate Marine Le Pen attracted a record amount of support in the first round of voting Sunday.

“We must respect the voters’ will,” Sarkozy said Monday, calling the support for Le Pen a “crisis vote.”

Hollande narrowly beat Sarkozy as 10 candidates competed in the first round of the election. Hollande and Sarkozy now go to a second round because no one got a majority Sunday.

Sarkozy, of the center-right RPR party, has been a significant figure on the European and international stages since becoming president in 2007.

Under his leadership, France has played key roles in international hot spots such as Libya and Syria, not to mention during the pan-European debt crisis, but the domestic economy has been a prime focus of the election. France is struggling in the face of sluggish economic growth and a 10% unemployment rate.

Hollande generally supports “more government action to stimulate the economy” whereas Sarkozy favors policies such as lowering some taxes and possibly repealing the mandatory 35-hour limit on the work week, said Michael Leruth, who teaches a course about the election at the College of William & Mary in Virginia.

German Chancellor Angela Merkel, through spokesman Georg Streiter, expressed her support Monday for Sarkozy, but said she would work “closely and well with any elected French president.”

Sarkozy is pressing for three debates with Hollande before the next round, accusing the Socialist of “fleeing his responsibilities” by saying he wanted only one debate.

Aurelie Filippetti, an adviser to Hollande, said Sunday there would only be a single debate, on May 2.

“There has always been one debate, and there’s no need for (that) to change,” she told CNN.

The far-right Le Pen, 43, did not specifically direct her own supporters to rally behind or against anyone in the runoff, but on Sunday night, she described Sarkozy as “the outgoing president” and characterized her party as “the only opposition.”

“We have never been as high as this,” she said, pointing to her showing. “This is only the beginning. Let us continue to fight.”

Her National Front party — founded and, until last year, led by her father — has been known for anti-euro, protectionist policies, its stringent positions on curbing immigration and other more right-wing stances that would appear to jibe more closely with the views of Sarkozy than Hollande.

Yet Ludovic Dedanne, a Le Pen adviser, accused Sarkozy of breaking promises during his five years in office and said people “do not trust” him. He recommended that his candidate’s supporters “abstain” in the runoff.

The gap had tightened appreciably from earlier results, when Hollande held a 6-percentage-point lead with just less than half the votes counted.

Turnout was 79.47%, officials said. That marks a drop from 2007, when 84% of the nation’s voters went to the polls, though key players from both Hollande and Sarkozy’s camps described it as a “strong turnout” indicative of citizens’ high interest in the race.

The results appeared to be historic, and a bad sign for Sarkozy. Several high-profile Hollande supporters told CNN that a French president running for re-election has never failed to place first in the first round of the vote.

Especially with neither of them close to a majority, who assumes the presidency hinges on what support Sarkozy or Hollande can get from those who didn’t back them Sunday.

In his speech Sunday night, Melenchon urged his supporters to “fight against Sarkozy” — noting that he’s not “asking for anything in exchange” from Hollande for siding with him.

“I’m asking you not to drag your feet,” Melenchon told his backers. “I just ask you to mobilize.”

One year ago, Hollande wasn’t even considered by many as the Socialist party’s best hope. That distinction belonged to then-International Monetary Fund chief Dominique Strauss-Kahn, who polls suggested could challenge and possibly beat Sarkozy.

But Strauss-Kahn’s political prospects floundered in the wake of sexual assault charges — later dropped — after an incident at a New York hotel, as well as accusations he participated in a prostitution ring in France. That helped propel the 57-year-old Hollande, who has never formally held any national elected office, to become his party’s presidential choice.

He is now aiming to become France’s first left-wing leader since the late Francois Mitterrand left office in 1995.

French Trade and Tourism Minister Frederic Lefebvre described Hollande as “the choice of the past,” with other Sarkozy backers playing up the fact that Francois Mitterand didn’t select him as one of his ministers during his 14 years as president, which ended in 1995.

Yet Hollande adviser Filippetti said that Le Pen’s strong showing suggested that Sarkozy couldn’t get those more philosophically aligned with his views to support him, despite his “aggressive” efforts. That will leave the incumbent hard-pressed to unite all French, she said.