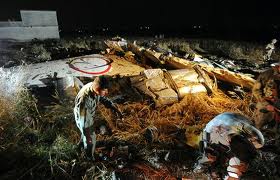 A Pakistani passenger jet with 127 people on board crashed into wheat fields Friday as it was trying to land in a thunder storm at an airport near the capital Islamabad, officials said. Sobbing relatives of those on the flight flocked to the airport as a government minister expressed little hope of finding survivors.

Emergency workers used flashlights to search among smoldering wreckage and body parts for any sign of life at the crash site, which was just a few miles from the Benazir Bhutto International Airport. One rescue official asked villagers to bring him sheets to cover the dead.

The aircraft was a Boeing 737-200 operated by Bhoja Air, a domestic carrier that has just four planes and only resumed operations last month after suspending them in 2001 due to financial difficulties. The flight was traveling from the country’s largest city of Karachi to the Pakistani capital, officials said. It was the airline’s first evening flight from Karachi, a Bhoja Air official said.

Relatives of those on the flight thronged the airline’s counters at Karachi and Islamabad airports, crying.

One man said on television that two of the passengers, Sajjad Rizvi and Sania Abbas, were newlyweds flying to Islamabad for their honeymoon.

It was unclear whether any people on the ground were killed, but the crash happened in what appeared to be a relatively unpopulated rural area. A violent rain, wind and thunder storm was lashing the capital at the time of the crash, which occurred about 6:40 p.m. local time.

“It was really bad weather for a flight,” said Navy captain Arshad Mahmood, who lives near the crash site. “The pilot was forced to move down to avoid clouds that were generating the lightening and thunder.”

Several farmers threshing wheat saw the craft burst into flames when it hit the ground.

“The flames leapt up like they were touching the sky,” said Mohammad Zubair.

The army declared an emergency and cordoned off the crash site

TV footage showed wreckage of the plane, including parts of what looked like its engine and wing, up against the wall of a small building. Rescue officials were working in the dark, with many using flashlights as they combed the area.

The last major plane crash in the country — and Pakistan’s worst ever — occurred in July 2010 when an Airbus A321 aircraft operated by Airblue crashed in the hills overlooking Islamabad, killing all 152 people on board.

A government investigation blamed the pilot for veering off course amid stormy weather. The impact of the crash was devastating, scorching a wide swath of the hillside and scattering wreckage over a kilometer (half-mile) stretch. Most bodies were so badly damaged that identification required DNA testing.

Bhoja Air started domestic operations in Pakistan in 1993 and eventually expanded to international flights to the United Arab Emirates in 1998. The company suspended operations in 2001 due to financial difficulties but resumed them in 2012.