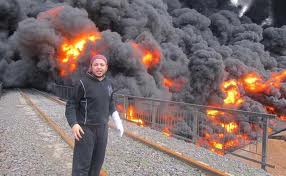 Beirut – Unrelenting bloodshed in Syria complicated preparations by a team of UN observers on Tuesday to monitor a truce that has brought only short-lived breaks in violence since Syrian President Bashar Assad pledged to enforce it last week.

UN Secretary General Ban Ki-moon said the ceasefire had been “generally observed” although there was still violence, but the mission of 250 observers would be “not enough considering the current situation and the vastness of the country.”

He said in Luxembourg that the United Nations was asking the European Union to provide helicopters and planes to improve the mobility of the operation, which he would propose formally to the Security Council on Wednesday.

It was not clear whether Assad would agree to allow more UN troops and foreign aircraft into the country.

The Syrian Observatory for Human Rights, relaying reports from anti-Assad activists, said at least two people were killed and dozens wounded by shelling as troops sought to take control of Basr al-Harir in the southern province of Deraa. Activists say the town has been a rebel stronghold.

It said they also shelled the Khalidiya and Bayada districts of Homs, where their artillery assault resumed on Saturday, two days after the truce came into force. Streets of Homs held by rebels earlier this year now resemble scenes from World War Two.

The reported violence, a day after the Observatory said 23 people were killed, greeted a UN team of six soldiers on their second working day preparing for the mission.

Assad, who agreed a peace plan with UN-Arab League Kofi Annan more than three weeks ago, has apparently ignored its primary demand – that tanks, troops and heavy weapons be withdrawn from populated areas and all forms of violence cease.

The US envoy to the United Nations, Susan Rice, said the realities on the ground could jeopardize plans to extend the mission, charged with overseeing an end to 13 months of fighting.