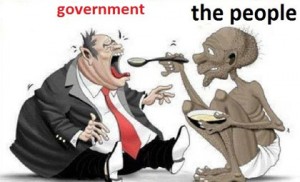 A group of hackers called Raise Your Voice infiltrated several government websites, including those of the Presidency, the Interior Ministry, the customs authority and the security services .

The hackers posted a picture of a naked, malnourished man feeding a big, fat guy in a suit, with this text underneath:

Even though an additional site, MTV Lebanon was also targeted at the same time, RYV clearly stated that they weren’t behind it, saying “Just to make things clear, we are not responsible for MTV website attack.”