Space shuttle Discovery cheered on way to the museum 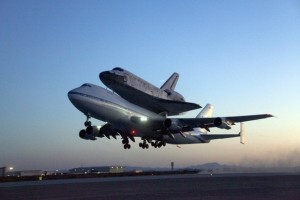 It was an extraordinary sight, even for Washington — a space shuttle flying over the nation’s capital atop a modified 747 on the way to its permanent new home, the Smithsonian’s National Air and Space Museum.

Crowds gathered on the National Mall, office workers peered out windows and motorists pulled to the side of the road to catch a glimpse of the retired Discovery orbiter, which made a sweep of the capital region, over the monuments, before landing at Dulles International Airport in northern Virginia.

“There was cheering and applause across the Mall,’’ someone tweeted on #spottheshuttle.

At the U.S. Capitol, Adrienne Watson, an aide to Rep. Loretta Sanchez (D-Garden Grove), said that a cheer arose from the congressional staffers who ran outside to see it.

“Folks were pretty excited. It was a pretty special moment and a great show,’’ she said.

It was such an event that the Mid-Atlantic AAA issued a warning to motorists: “Don’t let anyone or 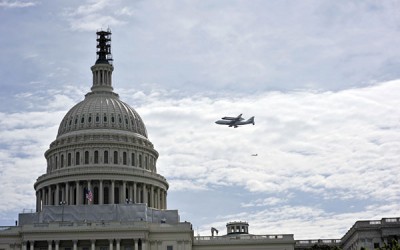 anything — even a space shuttle overhead — distract you’’ and “For safe shuttle-spotting, pull off the road and park your car.’’

A similar flyover is planned for the New York City area next week and perhaps Los Angeles this fall before those cities receive their shuttles.

The test shuttle Enterprise flew into the Washington area atop a plane in 1985 for delivery to the Smithsonian. The Enterprise now will be flown to Kennedy International Airport and moved by barge to the Intrepid Sea, Air and Space Museum in Manhattan.

The Endeavour is due to be flown atop a 747 from Kennedy Space Center to Los Angeles International Airport this fall and transported through the city streets to the California Science Center in Exposition Park. The Atlantis will be displayed at the Kennedy Space Center visitor complex.

A splashy ceremony is planned Thursday at the National Air and Space Museum annex, the Stephen F. Udvar-Hazy Center, featuring Discovery crew members and space pioneer John Glenn, who returned to space in 1998 aboard the Discovery at age 77.