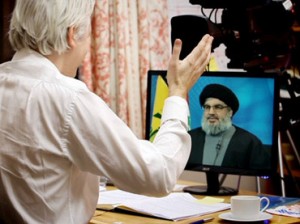 The opening episode of Julian Assange’s new talk show featured an interview with Hezbollah leader Hassan Nasrallah, whose Syria-backed militia is considered a terrorist organization in the United States and Europe.

Nasrallah, who rarely gives interviews, largely stuck to well-established positions, but he did reveal that his group had been in touch with opponents of President Bashar Assad, whose bloody crackdown on Syria’s protest movement has claimed thousands of lives.

Nasrallah told Assange that Hezbollah, long an Assad ally, had “contacted elements of the opposition, to encourage them, to facilitate dialogue with the regime.”

Speaking via videolink and through a translator, Nasrallah claimed that Hezbollah had been rebuffed.

“You have an opposition that is not prepared for dialogue … all it wants is to bring down the regime,” he said. He added that he would be happy to mediate if needed.

Later in the segment, Assange and Nasrallah also shared a joke about encryption — with the latter saying that Hezbollah kept Israeli code-breakers on their toes by using Arabic farm slang.

“That’s not going to do you any good in WikiLeaks, by the way,” Nasrallah joked.

Getting Nasrallah on air was something of a coup. The Shiite militant boss rarely gives interviews, and when he does they usually are on Hezbollah’s Manar TV station. According to Hezbollah’s media office, Nasrallah’s last outside interview was with Kuwait’s Rai TV three years ago.

The premiere of “The World Tomorrow” marked the launch of Assange’s unlikely career in television, and a partnership with a Russian state-backed station that many have found uncomfortable.

Assange said before the broadcast that he anticipated criticism along the lines of: “There’s Julian Assange, enemy combatant, traitor, getting into bed with the Kremlin and interviewing terrible radicals from around the world.”

But he said that RT had a big international reach and his guests had told him things they “could not say on a mainstream TV network.”

Assange remains under strict bail conditions at an undisclosed location in England while he fights extradition to Sweden on sex crime allegations.

His WikiLeaks website has been closed to public submissions amid a host of financial and legal problems.